Home Uncategorized The Isla Vista Shooting: What We Know 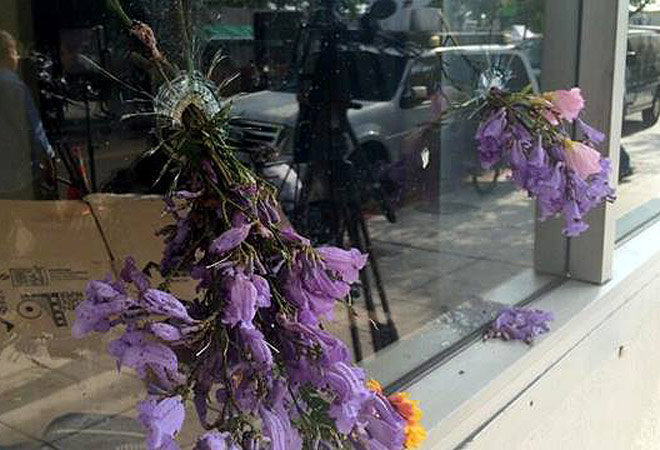 On Friday, a California gunman went on a rampage near the University of California, Santa Barbara. The shooter, 22 year-old Elliot Rodger, stabbed three men to death in his apartment before going on a spree that would kill three more and injure 13.

Officials say that Rodger left his home after the stabbing and banged on the door of a neighboring sorority. When the door wasn’t answered, he shot three women standing nearby, killing students Veronika Weiss and Katie Cooper and wounding one other. After that, he got into his car, a black BMW Sedan, and drove to a deli, where he shot and killed 20-year-old student Christopher Martinez. Rodger then drove down the wrong side of the road, firing several of the reported 400 rounds he had stored in his car at people on the sidewalk. After threatening a young female with his gun, turned his car around and headed in another direction, trading fire with a sheriff’s deputy who was on foot. Rodger then wounded another pedestrian and four sheriff’s deputies intercepted, shooting at his car and striking Rodgers near his hip.

The horrifying spree ended when Rodger struck a bicyclist and collided with several parked cars. When police arrived on the scene, Rodger was found with a gunshot wound to his head, which is believed to be self-inflicted.

The attack was premeditated, and Rodger had voiced his intentions in a chilling YouTube video titled “Retribution” in which he describes his plans and vows to exact revenge against women who have ignored him by dating other men. He said, “You girls have never been attracted to me. I don’t know why you girls aren’t attracted to me, but I will punish you all for it. It’s an injustice, a crime, because…I don’t know what you don’t see in me. I’m the perfect guy and yet you throw yourselves at these obnoxious men instead of me, the supreme gentleman. I will punish you all for it.” The full transcript is available here, though readers should be warned: it contains graphic and unsettling material. Rodger also wrote a lengthy manifesto that he emailed to his parents and several others the same day as the rampage.

The shooting has raised several questions about gun control, mental health, precaution, and misogyny. Christopher Martinez’s father has spoken out in favor of stricter gun control laws while Twitter users have created the hashtag #YesAllWomen to speak out against Rodger’s diatribe towards women. Others still are still are questioning the mental health of Rodger, wondering how he slipped through the fingers of law enforcement even though police had three previous incidents with Rodger—one in January when Rodger reported his roommate for allegedly stealing three candles, one in July 2013 when he claimed he had been assaulted (though police determined that in said instance, Rodger was the aggressor), and last month when a member of Rodger’s family asked police to check on him because of disturbing videos he had been uploading to YouTube.

The final incident led to an investigation, but Alan Schifman, the family’s lawyer, said that police interviewed Rodger and found him to be “polite and kind.” He was not taken into custody at that time. Rodger was being treated by multiple therapists and was a student at Santa Barbara City College, Schifman said.