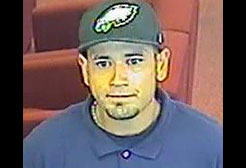 There’s a bank robber with a swanky moniker on the loose in L.A. The man—dubbed “The Hypnotist Bandit” because he doesn’t disguise his face and isn’t afraid to gaze directly at tellers while demanding money—allegedly robbed a Bank of America in Manhattan Beach on Friday. It is the fourth robbery officials have connected the bandit to since May 27, when he held up a bank in Pasadena. According to FBI officials, the suspect is between 190 and 200 pounds and has a fading heart tattoo on one hand. Also, we’re guessing he’s a people person.