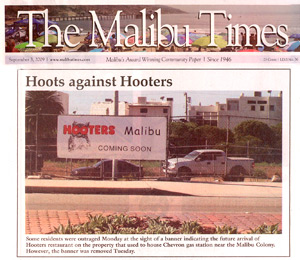 Sure, we learned a little bit about what’s stressing Angeleno’s back in August, but that didn’t prepare us for this.

In early September, someone went to the trouble of hanging a professionally made vinyl COMING SOON…HOOTERS MALIBU! banner on the undeveloped property across from the recently opened Malibu Lumber Yard in the middle of the night.

According to one “J. Wence,” who emailed us to claim responsibility for the self-described “good natured culture-jamming” that had locals scratching their heads,  the act was really a protest against the high-end center.

“They recently unveiled a much publicized twenty-five million dollar shopping plaza called, with irony I suppose, “The Malibu Lumber Yard,” he writes. “The entire courtyard is lined with obnoxiously over-priced boutique stores who seem to be oblivious to the fact that our country is in the thick of the worst economic crisis since the great depression. A typical one of these sells three hundred dollar concert t-shirts for kitschy heavy metal acts of the 80s, with crude, so-bad-its funny artwork drawn by inner-city kids.. I wish I were capable of making this up.” [sic]

Ok Wence, we’ll take your inability to make this up at your word, but your email does raise these pressing questions: Were you (and we’re just fact-checking here) kicked out of a kitschy heavy metal act of the 80s? And are you really a Malibu local? Like, have you shopped in that city before?

Either way, we can appreciate your attention to detail (nice nipple dots in the Os on SOON) and promise to let you know the next time we’re giving something like a spa treatment away.

Till then, over-priced boutique stores and inner-city child artists: You’ve been warned.