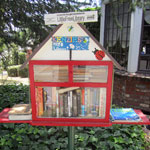 If you live in Los Angeles, it’s possible you’ve noticed birdhouse-like wood structures popping up around your neighborhood. Except these houses have a glass-paned door so you can see inside, and inside are books. A sign above the door likely reads THE LITTLE FREE LIBRARY and TAKE A BOOK, RETURN A BOOK.  It was on a recent walk with my wife near our Eagle Rock home that I opened the door of the structure I first noticed and looked inside.

There, 30 titles were lined up end to end with more books stacked on a single shelf.  “Great Expectations” and “The Great Gatsby” sat alongside “Divine Secrets of the Ya-Ya Sisterhood” and something by Mary Higgins Clark. It was the odder titles that I got a kick out of: A massive volume on family medicine, a slim paperback that offered advice on talking to your kids about sex, and one book titled simply “Your Best Birth.” There was also “Fine Wines of California,” written at a time when chilled Rosés and sweet red Burgundys were in fashion.  (Flipping through the pages, I could almost hear the soothing tones of Orson Welles advising me to guzzle some Gallo.) I really wanted to take that wine book home, but didn’t have anything to replace it with, so I made plans to come back with something not written by Mary Higgins Clark and make the exchange.

A few days later I returned, interested in finding out more about this pop-up lending library. Here’s what I discovered: In 2009, a man in Wisconsin built the first lending library as a tribute to his mother, a former teacher, who had just passed away. Then he made some for the neighbors, then for a bunch of friends in Madison. One thing led to another and now iterations of the concept can be found all over the world, and 38 Little Free Libraries are right here in the City of Angels.

I was an avid reader as a child, and continued right up to my thirties. But things change, and today I find it’s a struggle to find the time to read. But I still love books. I love the smell of them, and I love used bookstores. I especially love it when they have a fat tabby cat sleeping on a pile of books next to the cash register. If they served wine at used bookstores, I’d never leave.

I know the city pretty well and have been to most of the areas listed on this online map of lending libraries before, so the idea of to driving to and experience them all at once sounded kind of cool. Using Google Maps, I came up with two day-long road trips. Day One would lead me through Silverlake, Loz Feliz, and Hollywood before a right turn into Burbank would take me west through the Valley and into Sylmar. I’d head back down through Montrose and Glendale into Pasadena.  Day Two was all about the Westside: East Hollywood would be followed by stops in Larchmont Village, Mid-City, Brentwood, Santa Monica, Venice, Playa Del Rey, and finally Culver City.  (My apologies to the folks with Libraries in Manhattan and Redondo Beach.  I had to draw the line somewhere.)

So, on a warm Saturday morning, I filled a Trader Joe’s bag with some of my old books and hit the road. My plan was this; take pictures of the library and the books inside and make notes of anything interesting or unusual.  Then put the camera away and enjoy the library as a visitor.  I’d take a book and replace it with one from my bag.

At first I was self-conscious of how suspicious I looked, a guy driving up in a dingy Toyota truck, taking pictures of your house, and then just as quickly driving away. But everyone I met seemed happy to see me using the library.  After the first few stops I began to relax.

I started with the library that I had found on my neighborhood walk a few weeks earlier. The wine book was still there. In its place I left “How the Irish Saved Civilization.”  The next stop was across the street from Occidental College. The books were just what you’d expect from a Liberal Arts College crowd. Sure there was stuff by John Grisham and Tom Clancy, but there was also “Believing in Islam Women,” “One Day in the Life of Ivan Denisovich,” and “Chant and be Happy” by the Swami Prabhupada. “Whipping Girl; A Transsexual Woman on Sexism” rubbed elbows with “White Woman, Race Matters.”  My contribution was “The Picture of Dorian Gray” in exchange for a cool book on Jazz written by Studs Terkel.