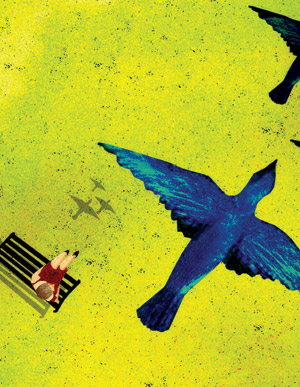 Every December I visit my pop. He is in the Westwood Village Memorial Park, which is tucked behind the AMC Avco Center movie houses on Wilshire Boulevard. A relatively small, pleasant, leafy burial ground in the middle of the metropolis, it is the city’s equivalent of a historic resting place. Marilyn Monroe and Natalie Wood are there. I always make the rounds, paying my respects to the famous and the not-so-famous and checking out the new arrivals before I settle down to have a few words with my father. I usually see him on his birthday, December 13, and sometimes on the day he died, December 28 (the year was 1998; he was 78), and once I went on a Christmas afternoon, between presents and turkey. He loved the holidays, the noisy spill of the big Southern California family of exes and steps and halves over which he presided, my loud, brash, pugnacious, and tender dad.

This year I have unwelcome news for him. I lost my oldest friend. Brooke Shearer and I met the first day of high school at the Westlake School for Girls. I was an often timid, earnest 13-year-old with a choppy pixie haircut. Brooke was full of zest and humor, with big brown eyes and thick dark hair. I remember seeing her for the first time in a crowded corridor of giggly girls in pastel shirtwaist uniforms. Something just clicked. Yes, everything in me said, that’s the one I’ve been looking for. That’s my planetary pal, my pied piper. Lucky for me she felt the same.

We took each other home. My father adored Brooke. He got her—the preternatural spunk and irreverence and appetite for life. She was funny and sharp and an easy match for his teasing paternal banter, the give-and-take, the quips. At her house I was equally adopted, folded into an energetic tribe of talkers and tennis players and book readers. There were family picnics and ski trips. Our parents became close. I made many good friends; we both did. We weren’t one of those knotted-up symbiotic pairs, elbowing others out of the way.

But at the heart of my days was this lit-up girl who was that perfect combination: a good student and a rebel at the same time. Irritated by authority, she was fearless at a level I was not; she was forever exhorting the rest of us to come on, hop in the car, take a trip, “plunge down the black diamond slope.” We helped put out the school newspaper and worked on the literary magazine and played for the volleyball team (though we were not much over five feet, either of us). She was one of those people who laugh so hard, it tips into tears. Right until the end we were still laughing that freely, often at ourselves as we idled away the day in our pajamas in her sprawling house in Washington, D.C., like teenagers on a sleepover instead of two midlife women, one of whom was dying of cancer. Our lives had diverged to a point. She had married a journalist turned diplomat, a man who became undersecretary of state in the Clinton administration. They had two sons and an expansive life of travel and good works (Brooke was involved with several global women’s health organizations). I stayed in L.A. and also married a journalist (a man I met on her tennis court, as a matter of fact). I inherited a bunch of stepchildren and became a writer.

We were continually in and out of each other’s lives. Still roughly the same size, we swapped clothes via FedEx and recipes via e-mail and shared pictures of grandbabies when they finally came. We never had a grumpy word—just once at the end when we were devastated by the idea that things weren’t going to go as planned: We weren’t going to grow old together. We were standing in her kitchen, her big much-used, old-fashioned kitchen where we had cooked so many meals. She railed; I ducked. We wept. Then we laughed again. She managed a pretty good year after that, despite the aggressive chemo. I came and went. We walked her two dogs and had our wavy hair straightened at the local beauty parlor. She put on dinner parties and book parties, and we colluded in a bittersweet sense of denial. We had no major talks; we didn’t need to. Over our 45 years, we had covered the ground.

When things turned, they turned quickly—early this year—and by May she was gone. I flew across the country to speak at her memorial service on a luminous spring morning in the nation’s capital, just the kind of warm, sun-splashed day we loved. People told me I was good. What does it mean to be “good” at a memorial service? It is a strange art form, if it can be called that. You have to speak from the gut but navigate around the clichés while including the requisite dollop of amusing anecdotes culled from your shared past with the deceased. An uncomfortable tangle of ego and heartbreak emerges that is uniquely weird. There is an inevitable pandering quality as you elicit people’s emotions. When there is no religious anchor, we bring to bear our own ideas of mortality on what a life adds up to, on what remains. I did say some words after my father died, but I wasn’t at my best. Too much open sorrow.

Alas, I am getting better. Shortly after Brooke died, someone else I loved succumbed to cancer, the writer Frank McCourt. I spoke at his memorial in New York in October. If Brooke was the gift of my formative years, Frank was the surprise of my more recent days. We met a little more than a decade ago—he and his wife, Ellen, my husband, Karl, and I—at a writers’ conference in Sun Valley, Idaho, just as Angela’s Ashes was making Frank a global phenomenon.

If there is chemistry in romance, particularly of the love-at-first-sight kind, we had it in our friendship. As it had been with Brooke, the connection between us was instantaneous, though no two people could have come from more antithetical beginnings—he from the tough lanes of Limerick, Ireland, I from the privileged streets of the Westside of Los Angeles. What do you know of suffering? he would chide me with a twinkle, drawing out the word “suffering” in his lyrical brogue. I was able to offer up sufficient familial tales and wounds to counter his kidding.

We met three or four times a year—either at the Idaho conference, where we had become regulars, or on visits to each other’s homes, his in Connecticut. Over morning bowls of oatmeal (McCann’s steel cut) or evening glasses of wine (sauvignon blanc), we hashed through everything: our latest writing projects, our dogs, the sorry state of American education. Days disappeared in words and wordplay. Frank was opinionated and kind—and very funny. But his humor wasn’t that of the punch-line joker. It came from somewhere deep, from learning early on how to survive the hurts. He bared the pain and humiliations of his Irish-Catholic childhood and tossed them into the air and made light of them, and late in life, in his sixties, he managed to nail them down on paper. Anyone who has read Frank’s books knows of his gift.

When he became rich and famous and universally adored, he changed not at all. There wasn’t a cause he wouldn’t lend body or name to or a manuscript he wouldn’t read. Unusually generous to other writers, he gave so many of us—friends and strangers alike—book jacket blurbs. Such behavior is not, in the highly competitive and shrinking literary world, commonplace. Far from it. Frank was rare that way. The last time I saw him he was in a hospice on the Upper East Side of Manhattan. He was surrounded by family: Ellen, of course, his daughter, and three brothers, who occasionally serenaded him with Irish tunes. It was very merry and very sad. I had flown in from Los Angeles to say good-bye. By the time I got there, the cancer had stilled his voice, but when I appeared in the doorway of the bedroom, he winked at me.

When a couple of months later it was my turn to come forward and speak about him, I talked about his books and his joy and how fortunate I had been to know him. I think I was good. I think he would have thought so—that I was warm and real and not too serious or too sappy. I hope so anyway.

I’ll tell Pop that it has been a tough year, with too much loss. I’m a little ragged with sadness, and I wish he were here to put his arms around me. I’ll inform him that I miss him this December more than last because of all that’s happened and because there is no such thing as closure, ever—a ridiculous, simple-minded notion. If there were, I wouldn’t be standing here.