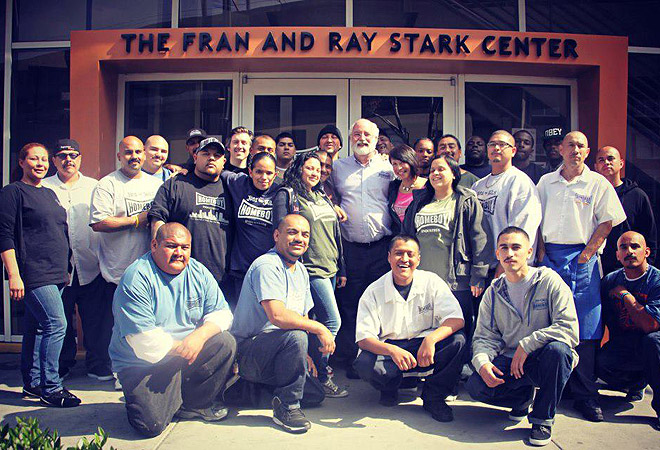 These were the kinds of statistics that the Goldhirsh foundation was dealing with when choosing the winners of their first My LA2050 initiative, a project in which both non- and for-profit organizations serving Los Angeles County submitted  proposals hoping to change the social landscape of Los Angeles for good.

The various plans were proffered under one of eight “indicators”: Arts & Cultural Vitality, Education, Environmental Quality, Health, Housing, Income & Employment, Public Safety, and Social Connectedness. Anyone was eligible to vote for his or her favorite project in these categories, and a scoreboard kept track of each indicator’s ten most popular entries. According to Tara Roth McConaghy, president and founding COO of the Goldhirsh Foundation, the winners of each indicator were chosen on the basis of three criteria: their impact on the indicators, the innovation and creativity of the solution, and the feasibility of completion. “It was a very time consuming process, but well worth it,” she says. “There were so many different projects that surfaced that we’re so sorry we couldn’t fund more of them. It was a great showcase of inspiration and talent in L.A.”

Standout winners from the eight indicators include Homeboy Industries (Public Safety), CicLAvia (Social Connectedness), and the Hammer Museum (Arts and Cultural Vitality). Two wildcard contenders were also chosen by the Goldhirsh foundation, neither of which were in any indicator’s top ten. “We wanted to make sure smaller organizations had a fair chance,” McConaghy says. “There’s one group that’s new to L.A. and we think they have a lot of potential. They’re called Mission Asset Fund, and they’ll be setting up lending circles to help people secure citizenship status as well as put deposits down on rentals.”

Each of the ten projects is required to realize their plan on or before December 31st, 2013. It may seem like a speedy deadline, but McConaghy says there’s a method to the madness. “This is our first year launching LA2050. The issues we’re facing are much bigger than what $1 million can cover. In our first year, what we want to do is build and engage community and get people involved, and we want to do it in a short amount of time to show that we can achieve results.”

For a full list of winners and project descriptions, visit My LA2050.

My LA2050: Project Proposals For A Better Los Angeles