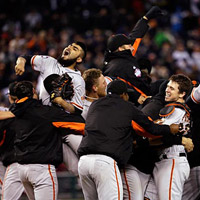 It was a post-Game One meme that would predetermine—and, eventually sum up—the 2012 World Series.

In one frame, an emergency dispatcher (headset, deadpan look, and all) saying, “911, what is your emergency?” In the next: Brian Wilson (faux-hawk, absurd beard, and all) saying, “Yeah, you might wanna call the San Francisco Zoo, because there’s a PANDA ON THE LOOSE and it’s out there KILLING TIGERS!”

The notorious Kung Fu Panda (Pablo Sandoval) set the tone early in the Series, whopping three homers—joining Reggie Jackson, Babe Ruth, and Albert Pujols as the only sluggers to do so in a Series—in game one. The now-World Series MVP wasn’t alone, though. As a team, the Giants trounced Detroit in a merciless, businesslike sweep, outscoring the Tigers 16-6, blanking them twice, and, for the most part, keeping Motor City fans silent.

The Series culminated in a tense 10-inning, 4-3 triumph Sunday night that had the teams fighting neck and neck and braving the cold at Comerica Park. Detroit took its first lead in the series with a two-run floater courtesy Triple Crown king Miguel Cabrera, but he struck out at his next at-bat and the Tigers were down again. Buster Posey, a member of the World Series-winning Giants squad from 2010, hooked a changeup inside the left-field foul pole for a two-run homer. Then, tied up after nine, it was a Marco Scutaro go-ahead single in the top of the tenth that lifted the Giants and turned the pressure on the Tigers.

For Detroit it was futility and frustration—feelings Dodger fans can relate to. Wasn’t it our team that should have been at Comerica Park? This is the Giants’ nineteenth World Series appearance (one more than the Dodgers have enjoyed), and it marks their seventh title (also, one more than the Dodgers). Blame it on the elements, blame it on poor chemistry, but when it comes down to it, the hometown team didn’t put up enough of a fight this season—and as a result they’ve been left in the Giants’ wake. It wasn’t a Dodger on the mound in the bottom of the tenth, but it was a familiar face. The bearded closer Sergio Romo—who dashed Dodger postseason hopes earlier in October—put down the last Tiger, Cabrera, with an 89 mile-per-hour heater and snatched the Giants’ second title in three years.

It is unfortunate that the Dodgers haven’t been able to pump their fists like Romo since ’88. But when the celebrations are done—we’ll let you celebrate, NorCal—you can bet L.A. will be gunning for the Tiger Killers again.