The latest evidence indicates that Gavin McInnes, the media pain-in-the-ass whose limited ideas led to the popularization of Brooklyn hipsterism in the early aughts, faked his disappearance from his Get Off My Lawn podcast last week.

On Thursday, following the kind of elaborate setup one usually sees on a children’s television show—Hey kids, should I answer the door?—the Proud Boys founder, who is accused by his detractors of being a right-wing, racist extremist, was seemingly interrupted in the middle of his Censored.TV network podcast after some unwelcome visitors popped into his Bronx studio during a live broadcast. McInnes has not been seen or heard from since.

Some say he was taken away by members of law enforcement—most likely the feds—and that he’s been in custody ever since.

But now it seems like the whole mid-broadcast disappearance may have been a bit.

Now possibly former friend of McInnes Owen Benjamin on Tuesday blasted the longtime stunt-boy for what he says is just a setup from the thirsty McInnes.

“Gavin is mad at me for telling people about his ‘prank,'” Benjamin, a comedian, wrote on Gab. “I used to have an opener who did this hilarious prank and told me he had brain cancer so I gave him money. When a woman fakes a rape is that a hilarious prank to not spill the beans on? When I urged my listeners to donate to Gavin’s lawsuit against the SPLC was that a funny prank too?”

Benjamin also shared what he says is a text exchange between him and McInnes, in which he tells Benjamin, “We’re done,” because the comedian told McInnes’ fanbase that the pretend arrest was just a ham-fisted slug move by a man who’s doing his worst to remain relevant. 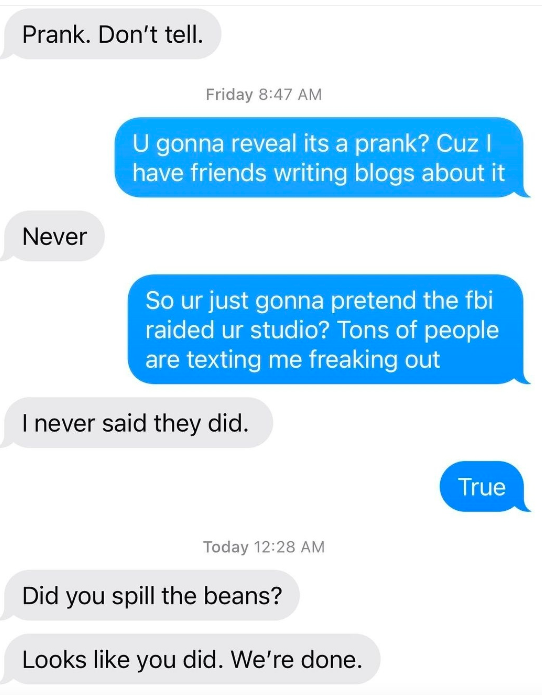 Benjamin, added, “I guess u didn’t get the joke after I spilled his beans… But it’s pretty obvious this was never a joke it was an attention grift at the expense of his listeners and American institutions. I don’t regret telling my listeners at all. And don’t pretend that I betrayed Gavin and I’m trying to sabotage ‘the right’ or some shit. I’m actually an honest dude who won’t sit there and let people go along with a scam when I know the truth about it. And trust me, this isn’t a ‘prank.’ Ruining a ‘prank’ doesn’t get people saying ‘we are done.'”

Meanwhile, we hear McInnes is actually just enjoying the surf and sun in the south of France.

A spy clued us in this weekend that, “I’m currently on vacation in Marseille in the south of France and just stood in line behind Gavin McInnes and his wife and kids for a taxi.” He added, “He didn’t say much and initially I brushed it off but then I knew it was him when I saw his wife Emily Jendrisak. I was directly behind him at the train station, Marseille Saint-Charles.”

While it would be very much in keeping with McInnes’ interests to visit any remaining set pieces from The French Connection 2 that still exist in the port city, we cannot confirm that he is in the south of France.

One way or another, the NYPD has said they haven’t busted McInnes, and the FBI won’t comment. It’s hard to see how McInnes will come away from this, but it could be seen as a major violation of the trust his subscribers pay for. Then again, McInnes has a talent for slipping away from the facts that surround him—for instance, that he was just one of thousans who showed up on Bedford Avenue around 98 looking for a home.

McInnes is also currently house-shopping down South when he’s not tending to whatever this was supposed to be all about and wasting everybody’s time, which is apparently central to the douchebag culture he says he invented.