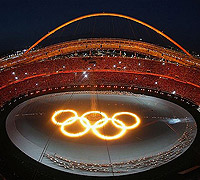 Live Coverage of London’s Opening Ceremonies
Follow up on all the action with the staff of the Los Angeles Times.
[LAT]

Selena‘s Lupe Ontiveros Dies
The Mexican-American actress was one of the most recognizable Latinas in Hollywood. (You can read our feature, “A Bunch Of Characters,” to get look at her career.)
[KTLA]

Street Racing May be the Cause of a Commerce Hit and Run
19-year-old Jose Mendoza was killed last night.
[NBCLA]

Dancing With The Stars All-Star Lineup Revealed
Who dropped the mirror-ball on bringing William Levy back?
[People]