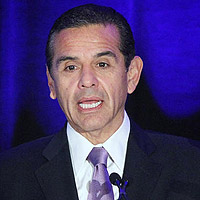 Oldest Living Ex-Dodger to Have Meet-And-Greet with Current Team
96-year-old Mike Sandlock played for the Dodgers in their 1945 and 1946 seasons.
[FOX]

Mayor Villaraigosa Calling For Weapons Ban
The mayor calls for a federal ban in light of this morning’s Colorado shooting.
[NBCLA]

Olympic Torch to Make Grand Entrance in London
The iconic symbol of the games will descend from a helicopter.
[KTLA]