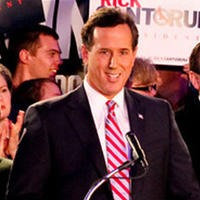 Santorum Compares Gay Marriage to Polygamy. Again.
His campaign—the one for president of the Out Of Touch Politicians Club—is surging.
[LA Times]

200.000 Jobs Were Created in December
The national unemployment rate is down to 8.5%
[LA Times]

The Berman/Sherman Congressional Race Heats Up in Woodland Hills
Two democrats with last names that end in erman share a dream to return to Congress. Only one will prevail.
[Daily News]