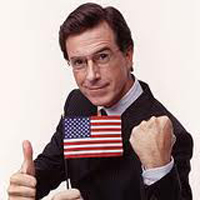 Stephen Colbert and John Stewart are Up to Something in South Carolina
The Colbert Report host put his Super Pac in the Daily Show host’s hands and has formed a presidential exploratory committee. This, should be good. For who, we don’t know.
[ColbertSuperPAC]

Cuts to L.A.’s Complaint Hotline Generate New Complaints
1.4 million residents would like to speak to a manager.
[Daily News]