Home Uncategorized The Foam Finger: Puig For All Star-Elect! 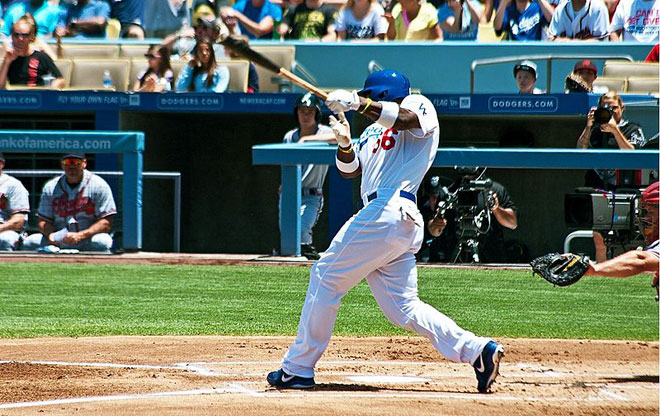 On June 3rd, the Dodgers were experiencing a troubling temperature gradient. A season-worst eight games below .500, the Boys in Blue were in the ice cold NL West cellar, struggling to produce at the plate while manager Don Mattingly’s hot seat began to boil.

Thirty-four games later, the Dodgers strolled into Chase Field red-hot, second place in the West with a 44-45 record and a chance to move within a game-and-a-half of the division-leading Arizona Diamondbacks.

Suddenly, the team with the MLB’s third-highest payroll is starting to pay dividends, and the biggest asset on the Dodgers’ books has been 22-year-old right fielder Yasiel Puig, who just 35 games into his major league career has a shot to make his first All-Star team.

With polls closing today at 1 p.m. for the All Star Game’s Final Vote competition, we’re rooting for the Dodgers’ wonder kid to be an All Star-elect. Here’s why:

He can hit.
Entering Wednesday night’s game, Puig boasted a .407 batting average, following a June that earned him Rookie of the Month and Player of the Month honors.  Nipping at Puig’s heels is teammate Hanley Ramirez (.404), who has jumped off the DL and into the history books with Puig.  According to the Elias Sports Bureau, the last time a pair of teammates simultaneously held .400 batting averages with at least 100 at bats apiece in the season was in 1931, 27 years before the Dodgers moved to Los Angeles.

He’s fearless.
Part of No. 66’s appeal is his hunger to make the difficult play and his willingness to lay his body on the line. Take July 4th, for example. In the fifth inning of a divisional showdown at Coors Field, the Cuban sensation suffered a bruised hip when he slammed into the wall in right center field after violently wheeling around to make a crucial grab.

It’s also been difficult not to mistake Puig’s right arm for a piece of well-crafted artillery. The youngster has fed off of baserunners foolishly testing his strength for the last month to the tune of three outfield assists.

He’s got “It”
Since bursting onto the scene just over a month ago, Yasiel Puig has breathed life into a Dodgers team that looked anemic before his arrival and has gone 21-13 with him in the clubhouse. Though Puig is a free-swinger—he earned the dreaded “Golden Sombrero” after striking out four times last Saturday in San Francisco—he has shown exciting flashes of what could be five-tool ability, the likes of which doesn’t come around often.

Call him the next Bo Jackson. Call him ManBearPuig. Call it Puig-mania. All we know is the 6-foot-3, 245 pound right fielder has been a treat to watch.

Puig is up against four other players, including Dodgers first baseman Adrian Gonzalez, for the National League’s final All-Star Game roster spot. Vote for your pick here.