Home Uncategorized The First 50 Days: Catching Up with Madeleine Brand 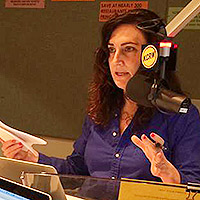 Since January 27 when she launched Press Play, KCRW’s first original daily program since 2001, Madeleine Brand has been a busy lady. We caught up with the journalist, radio host, and woman about town to see how things were going with her new show.

What has surprised you about doing the show?
How painless it was. It’s a lot easier getting the show on the air every day than I had anticipated. I’m surprised that I can go an entire day without seeing natural sunlight. I end up spending the entire day in the basement. I’m also pleasantly surprised at the amount of creative freedom I have. But what I’m really surprised by is that we haven’t heard more negative feedback. When you change radio programming, a lot of listeners get really cranky about it.

You’re in a different time slot than you were at KPCC. How do you structure a midday show differently from a morning show?
In L.A. a lot of people start and end their day later, so I think at 9 a.m. you’re doing a lot of hard news. At noon they want something a little different, something that’s a little more entertaining, in-depth, thoughtful. We’ve been able to be more creative. We also have more lead-time, so we can do more day-of stories instead of yesterday stories with a today gloss on them, which is often what you do for a morning show. You’re not as much of a slave to the news cycle as you are in the early morning.

How do you divide the coverage between local and national stories?
That’s a tricky question because I look for local stories that would be of interest to people who don’t necessarily live here. That said we will do local stories. We’re not covering what happened in city council last night, but we did a story on this downtown boarding school. It’s a news story in the sense that there’s a downtown boarding school opening up, how strange. But it’s more of a cultural story about how our city’s changing because the downtown boarding school was built by a Chinese investor. Then you find out that a lot of buildings downtown are being built by Chinese money. That’s an interesting window into what Los Angeles looks like these days and how global economic trends are affecting us locally. Then we find out that American higher education is still coveted by people from across the globe and they want to get a leg up into it by going to this boarding school. Then it becomes an issue of the haves and the have-nots and who’s got money and who doesn’t. It becomes a big story about how world and local economics are playing out—all in this downtown boarding school story.

Tell me about a typical day producing the show.
My producers and I have a morning meeting at 8 o’clock where we bat around what we call top-of-mind stories, the story that we should lead the show. We talk about ideas for that day. Some of those ideas will be offloaded to the following day or they’ll be stretched for another show. Then we spend the next three hours getting ready. Then we go live at twelve. About half the show is live and half is taped.

What’s the most fun you’ve had doing a segment?
The cat art show. We went all out on the cat art beat. We really ripped the lid off that one. News shows shouldn’t be shows that you have to listen to. They should be shows that you want to listen to. It’s like a dinner party. When you have a really successful dinner party you talk about serious issues and you exchange ideas but you also have a lot of fun. That’s kind of the ambiance that I want to create on the show.

What has been difficult about the show?
If I could wave my magic wand, I would have more original reporting on the show—and at the station—but it costs money. I think we do a great job with what we have. My staff works really, really, really hard. They work 10 or 12 hours a day, constantly coming up with material and producing. When you produce these sound-rich pieces, it takes a long time. So it’s a lot harder to produce a show like this than to produce a call-in show. If I could, I would have a couple more producers.

Any surprising or strange moments on the show?
It happens every day. I’ll think, “What?! What did that person just say?” We were doing a story on paparazzi so we had Frank Griffin on because he owns a photo agency that supplies a lot of celebrity photos to magazines. It was a segment on whether or not they should be photographing celebrities’ children. It got a little contentious because he was defending behavior that basically everybody else thinks is atrocious. Children are seen as the innocent victims. At the same time, I could see his point of view, that parents use their kids for their own purposes. This was a live interview and he was really forthright; I guess all of us were just like, wow, I can’t believe you’re saying this on the radio.

I also interviewed Benjamin Millepied. It surprised me that he was so defensive when I asked him about running the Los Angeles Dance Project and not being in Los Angeles.

I feel like it plays into this narrative, which I’m increasingly aware of, of Los Angeles beginning to assert itself and say it’s not okay to be treated as a second-tier city. It’s fascinating. My producer, who came from Seattle, marvels at this. He’s like we never have these conversations about who we are in Seattle. Whereas in Los Angeles we seem to have these conversations every day. What is Los Angeles? What are we becoming? How are we perceived by other cities? New York never has that conversation. And neither do smaller cities.

Why do you think we’re having this conversation so much right now?
I think it’s because Los Angeles now thinks of itself as a world-class city. Before I don’t think it really cared. People who came to Los Angeles were escaping other places, and Los Angeles was never seen as a metropolitan city. Now it is. There’s a lot of talk about it becoming like a lot of other cities in terms of transportation and tall buildings and I think that’s caused a lot of panic. While you gain a lot in terms of livability and density, you also lose this idea of a sylvan, easy horizontal lifestyle that exists in direct opposition to the vertical lifestyle of the East Coast or Europe. I think there’s some anxiety to that. How do we hang onto this free and easy California lifestyle when we’re becoming more urbanized? I think it’s also part of our changing demographics. We’re becoming much more of a melting pot than we have historically been. Literally, what is our identity? Literally, what language are we speaking? It turns out to be hundreds of them.

Do you think that’s a good conversation to be having?
I think it’s a great conversation! I don’t believe you should have one answer to that question. The only thing I wish Los Angeles would do is get over its inferiority complex and be okay with the ambiguity.

Interesting things happens outside the lines, in the cracks and the gray areas. When something is settled, it’s boring.