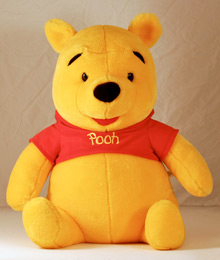 The phone rings. Email dings. A question about the magazine is posed. These things usually occur on Fridays. Here’s the latest:

This week’s FAQ: I’m looking for a link to an article by Amy Wallace a few years back about the on going litigation over Winnie the Pooh. Also, is she the same Amy Wallace involved with the book on Carlos Castaneda?

My Answer: Here ya go. Amy wrote about Pooh v. Disney and One Hunny of a Lawsuit in August of 2002. One sad update:: Shirley Slesinger Lasswell (or the Pooh Lady as she was commonly known) who brought the suit again Disney died in 2007.

To answer to the second part of the question: different Amy Wallace, not the woman formerly involved with Castaneda.