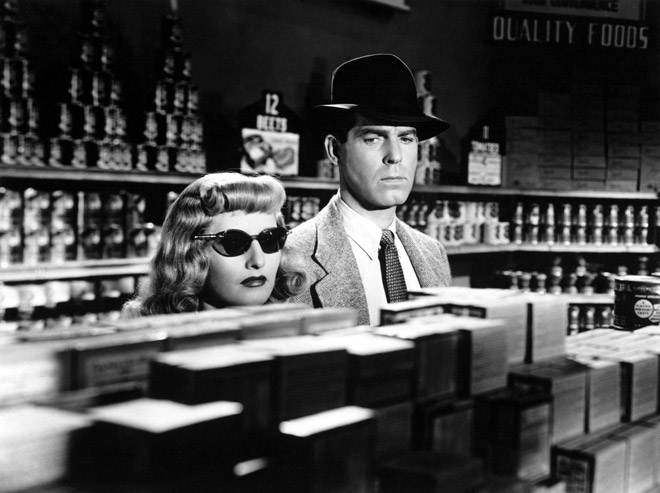 Barbara Stanwyck is the golden dominatrix lashing schlub Fred MacMurray—cast over tough guys George Raft and Alan Ladd in a brilliantly counter-intuitive coup—to the service of her homicidal machinations. The first time MacMurray sees her she’s wearing a towel and an anklet, and hasn’t been down the stairs five minutes before the wheels in her head are turning. “I wonder if I know what you mean,” she says when MacMurray hits on her, to which he answers, “I wonder if you wonder,” the first and last time before it’s too late that he has any clue she’s a hundred miles ahead of him.

The darkest piece of mainstream entertainment Hollywood had made to this point, based on James M. Cain’s second novel, Indemnity arrived near the end of World War II, a rare historic moment when good and evil truly were clear-cut. While most great noirs were a response to the uncertainty of the nuclear era, this pageant of base human appetite coincided with a time when an imperiled nation had little use for moral confusion, making the movie all the more shocking.

Even Cain was impressed. “The only picture I ever saw made from my books,” he confessed, “that had things in it I wish I had thought of.” It may have helped that the feeling wasn’t mutual; the novel was adapted by director Billy Wilder and Raymond Chandler, the latter—having just written his own debut, The Big Sleep, with its uplifting cast of pornographers and nymphomaniacs—openly offended by what he considered Cain’s vulgarity. Indemnity is shot through with brilliant disgust, its fandango played out on the loping rises of Los Feliz where murder “smells like honeysuckle.”

Will Bob Hope’s House be the Next Old Hollywood Home to Be Demolished?

Scene It Before: The Colonial Revival-Style Home from Double Indemnity