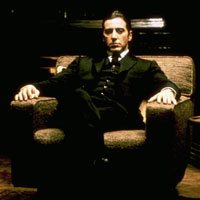 Today we kick off our weekly blog series by Los Angeles’ magazine’s film and TV critic Steve Erickson on the classic movies — be they canonical, contemporary, or contrarian — that ought to be in every well stocked home library. These are the films that if you haven’t yet seen, you should.

The great American film epic, its first two parts are mostly perfect, and when they aren’t, the whole overwhelms the sum: “I believe in America,” are the opening words, an expression of faith followed by five hours of deceit, betrayal, and mayhem as Vito Corleone—played in his elder years by Marlon Brando—rises from the streets to build a criminal kingdom. The Statue of Liberty is the femme fatale of The Godfather; muse and seductress, she makes her most ravishing appearance early in Part II as a boat full of immigrants, the 10-year-old Sicilian orphan Vito among them, arrives at Ellis Island in 1901 and the passengers rush to the side to gaze at the statue in solemn awe. By the third or fourth time you watch the scene, you realize that for many of these people the American Dream will never be more fulfilled than at this moment. Later the statue is glimpsed through windows and their bars: when Vito is quarantined by authorities and sits alone in a bare room staring at the statue, singing to it; and later still when a cardboard statue is seen through the cardboard window of a stage play in Little Italy where Vito, now grown into Robert De Niro, is about to be introduced to his destiny, and where his newborn son Michael is about to be introduced to his as well.

At the beginning of Part III, which takes place seven decades later toward the end of the 20th century, after Vito is long dead and Michael himself nears the end of his life, the New York landmark we see isn’t the Statue of Liberty but the World Trade Center. Filled with splendid moments and thematically audacious in its correlation of the Corleone empire with the corruption of the Vatican, the third part is less a botch than a missed opportunity, leaving us to wonder what might have been had the studio paid Robert Duvall what he wanted to reprise the role of consigliore Tom Hagan, had it given writer-director Francis Ford Coppola more time and money to make a longer film (Part III is a prime example of how a movie can seem too long when in fact it’s not long enough, because it hasn’t taken the time to give the audience the necessary narrative and emotional reference points), had Coppola waited for Winona Ryder to recover from pneumonia to play Michael’s daughter (although Sofia Coppola is nowhere as awful as her critical savaging at the time suggests), and had the director been able to convince Al Pacino that in Part III the star appears to have completely misunderstood his own performance as Michael in parts I and II, his seamless transformation from war hero to nihilistic mobster giving way to Pacino’s increasingly outsize acting-style.

Watch Part III then as a kind of fever dream of the future that visits Michael as he sits alone on his Tahoe terrace at Part II’s conclusion, staring at the dance of dead leaves and surveying the black landscape of his soul. If the movies are the popular art of the 20th Century, notwithstanding three decades of bebop and rock & roll in the middle, The Godfather is the best case for it, both words “popular” and “art” being as equally operative as in Great Expectations or Hamlet.