Home Uncategorized The End of the Road 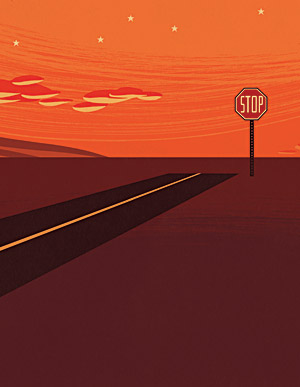 Taking the car away from someone in L.A.—make that from someone who taught you to drive, who, for that matter, put you on the earth—is hard. Telling a parent he or she can no longer drive is difficult anywhere, a rite of passage in reverse: the end of something signaling the end of everything. The symbolism is as cruel as it is obvious. But forget the symbolism. Let’s just talk reality in a sprawling city like this one. How should my eightysomething mother get around when I finally have the guts to appropriate the keys?

Yes, Los Angeles has buses, and hundreds of thousands ride them. But how is she supposed to get to the nearest bus stop in the first place, a hard stretch of blocks from where she lives? This is not an elder-friendly town by any measure. You can’t just stroll out and be in the thick of things, not in deepest suburbia. The truth is, if you lose your car, you are in danger of becoming a shut-in. Yes, if you have money, you can hire someone, but that, as my mother reminds me over and over, kills the fun, the spontaneity. “I have never had to ask anyone for anything,” she says, a fierce look on her still-beautiful face, “and I don’t want to start now.”

Oh so heart-piercingly haughty. She is fighting for her right, and I admire her for that and am maddened by it. My mother is my best friend. How corny is that? How lucky? For my entire life we have never lived more than a half mile from each other. In effect, we have lived in this huge metropolis as in a small town, deeply tethered and bound by shared loyalties: the tailor, the boutique, the Mexican restaurant. My mother grew up here, and that means she has spent a good part of her days behind the wheel of a car. We love to drive, we L.A. girls. My mother remembers her own teenage years, sailing forth to meet a boyfriend, driving to the movies or to the beach, just as I have my own similar memories. In that earlier spin of the planet, when the lives of women were more circumscribed, more decorous, the car was a place of unfettered freedom. There has always been much lore about boys and their cars, all that vroom-vroom testosterone roaring around the streets. But the act of driving was—and probably still is—more life altering, gender altering, for girls. Once licensed and on the road, you flew outside the parameters of “correct” feminine behavior. You could court speed and danger and cruise the freeways—back when they were indeed “free” and unjammed—in romantic rapture or in Didionesque ennui. I drive, therefore I am an Angeleno.

A car was also a venue for sex, not necessarily all-the-way backseat sex. Mostly it was a cocoon for kissing, long, passionate sessions while parked at the beach at sunset or up on Mulholland Drive on a cold night, the city twinkling below, the windows steaming up. If the automobile was yours and you, as the girl, were in the driver’s seat, there was a conferred boldness, a sense of warm excitement as you navigated to that chosen necking spot and/or when you drew the line, said “time to stop,” and turned the key in the ignition for the trip down the mountain. The remembrances come together: a given boy, a given car, lips, the city when it was younger and you were much younger, too.

In her heyday, when my mom had stopped acting—her first love and career—and started selling real estate on the Westside, she drove a 1966 Mustang convertible, blue with a white top. Divorced, she was an emblem of elegance and determination, of financial freedom and responsibility. I would often, at any hour, pass her in that Mustang as she roamed the neighborhood, eyes bright to the chase, big for sale signs in her trunk along with the bulky mallet she used to pound them into someone’s lawn.

Gone are the signs and the mallet and the muscles it took to lift both. Gone, too, is the robust real estate market. What remains is that car—no longer the Mustang, now a Subaru wagon—and the stubbornly independent woman behind the wheel. We are having the first battles of her long life and my longish life. Don’t you think it’s time to stop, I say. Even to me, I sound ridiculous, more tentative than authoritative.

My mother is still sharp, a CNN junkie who is capable of full engagement and full enragement; she assures me she could put Robert Mugabe out of his ghastly misery with her own small hands. She has also, as she reminds me at least once a day, not had an accident, just a paint scraper on the wall of a tight garage, no other car involved.  “Your husband has had more fender benders than I have,” she says, mounting her favorite sideways defense.

“Beside the point,” I say, teeth clenched.  “Your reflexes just aren’t as sharp as they were, or your eyes.”

“Stop it,” she says, pounding the table. “Go talk to my eye doctor.”

I did that. He didn’t help. These doctors don’t help, at least in my experience and that of most of my friends. To be honest, it’s not up to them. A year and a half ago my mother’s vision turned a bit cloudy, and the doctor told her she couldn’t drive. I was with her for the appointment. She cried, and I put my arms around her. “I’ll come get you more,” I said. “We will have more lunches, go to more museums.”

About three weeks later she called with a note of triumph in her voice. “He says my eyes are fine now.”

She had a big birthday soon after, and I knew she would have to take the DMV test again—not just the written one but also the driving-parking-stopping one. Her birthday came and went, and nothing was said. Coward that I am—this is my mom, my fabulous, tricky, devious mom—I waited about two days before asking, “What about your license?”

“No problem,” she said, beaming. “I took myself down there and passed with flying colors.” The defiant look on her face said, “OK, you want to go a few rounds?”

I don’t, I don’t. I hate this. My friends who are going through this dance hate it, too. So much ado about a car when there are a million other things to think about and talk about: love and loss and dogs and meals and Brad Pitt and Barack Obama. There’s a lot at stake here; that’s obvious. We are haunted by the fear that a parent might get hurt out there on the road—but more, that he or she might hurt someone else. That’s the phone call we dread. That’s what we are on guard against. All of my contemporaries carry the memory of the octogenarian who, in 2003, plowed through the Santa Monica Farmers’ Market, killing ten people. I need only close my eyes for a second to see that carnage and to shiver in terror.

I am watching my mother. I sometimes tail her when she doesn’t know it, just as she tailed me when I first sat behind the wheel at 16. Of course, I was in the beginning of my driving life and wildly cautious, if that is not an oxymoron. In fairness to my mom now, she, too, is wildly cautious without being wacky slow, without creeping along in a way that makes other drivers frantic and crazy. Also, she never drives at night and never more than a few miles. These are the rules, and she is good about them.