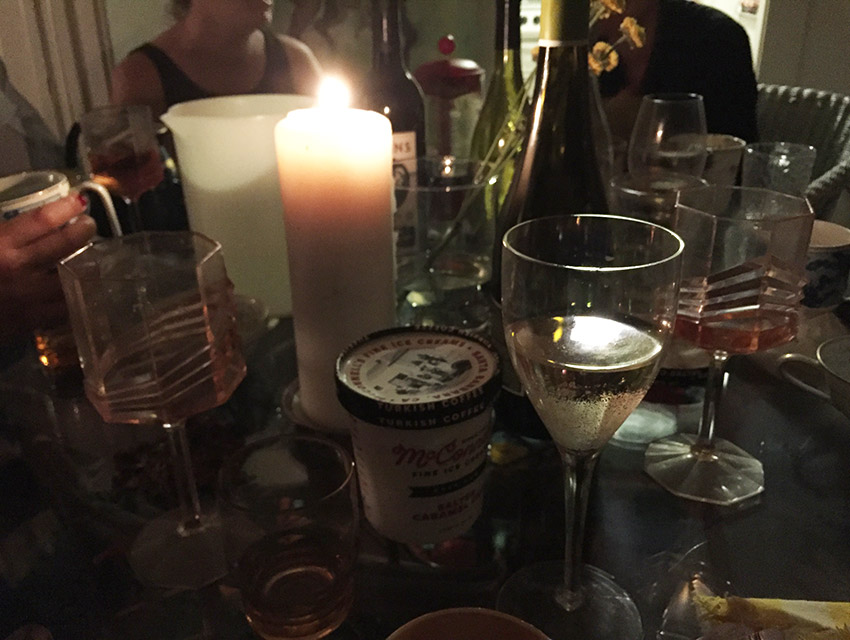 It was one of those dinner parties that make you think, I should have people over more often, dirty dishes be damned. There was laughter—loud, hearty laughter—and more than enough wine. There was storytelling, and wet eyes. I walked back to my car at the end of the night high on good food and conversation with friends. Except, the six people I had shared enchiladas and kale salad with in a candle-lit studio in Venice weren’t my friends at all. We were perfect strangers.

Lennon Flowers was a senior at the University of North Carolina when her mom died of lung cancer in 2007. She coped by staying busy, a strategy that worked well until another life event knocked her off her feet eight months later: Flowers went out for an evening run and got hit by a car. The accident left her with two broken legs. As she began her recovery, grief for her mom set in. “I’d lost the person who was both confidant and caregiver,” says Flowers, “and I couldn’t run from it anymore.” It took about a year for the physical and emotional pain to subside, but when it did Flowers found herself thinking about her mom’s death in a new way. “I became aware of all the things I’d never gotten to talk to her about,” she says. “I knew her as a mother, and while I understood parts of her history, I wanted to know what she was like at 23 and 25 and 28. I craved the adult relationship that my friends were beginning to have with their parents, and the presence of someone who could act as a counselor when it came to jobs and relationships.”

Flowers moved to Los Angeles for a job soon thereafter, and what her mom’s passing meant shifted once again. “All of a sudden,” she says, “the details of my life required explanation. I didn’t know how to let new friends in on her death and everything her death had changed.”

Flowers met Carla Fernandez, who is now a creative agency executive, on her first day of work. Like Flowers, Fernandez had lost a parent in her twenties. That commonality sparked a connection—and then an idea.

The Dinner Party is easier to understand than it is to describe. Its purpose is to provide those who have experienced loss with a community of people who get what it’s like to lose a loved one because they’ve experienced it, too. The Dinner Party is organized around potluck meals, so it’s less grief support group and more sitting shiva for strangers. There are parameters (only twentysomething and thirtysomethings need inquire) and a few important rules (“abstain from bullshit. No whitewashing loss. No standing on platitudes. No pitying”), but the spirit of the Dinner Party is inclusive and inviting. Its manifesto: read, share, and pull up a chair.

The Dinner Party began, unofficially, in 2010. A short while after she and Flowers met, Fernandez hosted a small gathering at her bungalow in Echo Park. None of Fernandez’s guests had met one another before, but they shared one thing in common: They’d all experienced deep grief. What happened that night—the telling, the crying, the knowing—was both spontaneous and cathartic. The next morning, Fernandez and Flowers began thinking about ways to share the experience with others.

Today, the Dinner Party events are held in 43 U.S. cities stretching from Anchorage, Alaska to Bread Loaf, Vermont. More than 140 people have signed up to be hosts, and more than 1,000 have attended affiliated dinners. The organization’s reach is spreading quickly. In the last 16 months, more than 1,100 people have expressed interest in joining a table by filling out an online form.

Eva G. was one of the Dinner Party’s first guests. The Mar Vista-based law student lost her dad when she was 25. She says his death cleaved off a piece of her, making it hard for her to connect with others, and especially the people she loved. The Dinner Party made her feel less alone. “Having someone witness your emotions, check in with you periodically, and even just allow you to remind yourself of where you’ve been and how far you’ve come—as cliché as that sounds—is incredibly healing and affirming.”

For Jess Brownell, a television writer who lives in Glassell Park, the Dinner Party is as much a way to feel close to the dad she lost at 17 as it is a way to build a new support group. “Despite being gone 12 years, he is still very much a part of my life,” she says of her late father. “A lot of the uninitiated don’t understand that when you lose someone, the urge to tell stories about them or bring them up casually in conversation doesn’t go away. But some friends act uncomfortable when I mention my dad, probably thinking I’m trying to have a heavy conversation about death. At the Dinner Party, I get to reminisce about him without worrying that I’m being a downer. And when I need to be a downer and explore darker memories related to my dad’s death, I know that’s OK, too.”

For Flowers, who’s now overseeing the Dinner Party full-time, the organization did more than help her heal. It changed the course of her life. “Loss can wake you up to different priorities,” she says. “That was true for me. The Dinner Party has allowed me to spend my time on a subject matter and experiences that provide a pretty infinite supply of meaning and purpose.”

So, what did I talk about on the night I experienced the Dinner Party myself? My late grandmother, mostly, and how I think of her every time my son, who she adored, does something new. (He’s two years old, so that’s roughly five times a day.) I also described the chocolate cake she baked for my wedding, how we saw each other almost every day in the last years of her long and happy life. Enough time has passed since my grandmother’s passing that my friends no longer ask how my family and I are getting on without her. I don’t blame them for having moved on. But I haven’t. And as Brownell passed a half-empty bucket of caramel salted ice cream in my direction at the end of our dinner, that felt OK.