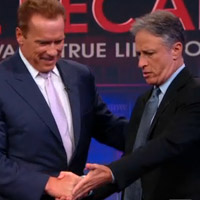 Arnold Schwarzenegger’s press tour for his new memoir pulled into The Daily Show on Monday night, and, along with some of the juicier confessions in Total Recall: My Unbelievably True Life Story, the former Governor talked politics—specifically California politics—with Jon Stewart.

“It was a real eye-opener,” said Schwarzenegger of his time in Sacramento.

“California is a very interesting state because they have made it very difficult to raise property taxes,” said Stewart. “The are sort of this strange direct democracy where they can put things on referendums and make it so you cannot raise taxes but the people can also vote on what they want, so it’s the perfect symbol for the difficulties we have in the country of getting the services we want while convincing people that they do have to pay for it.”

Schwarzenegger agreed, but he also came to the defense of Californians, pointing out that not all of the state’s fiscal problems—of which there are many—are because of voters and our ballot system. California carries “$400 billion of unfunded liability,” he said. “This is something that was done by the legislature, not the people.”

“If only someone could come back from the future,” joked Stewart to close the interview. Hey, at least the 405 didn’t come up.