Home Media The Unique Challenges of Being the Only TV Station That Caters to... 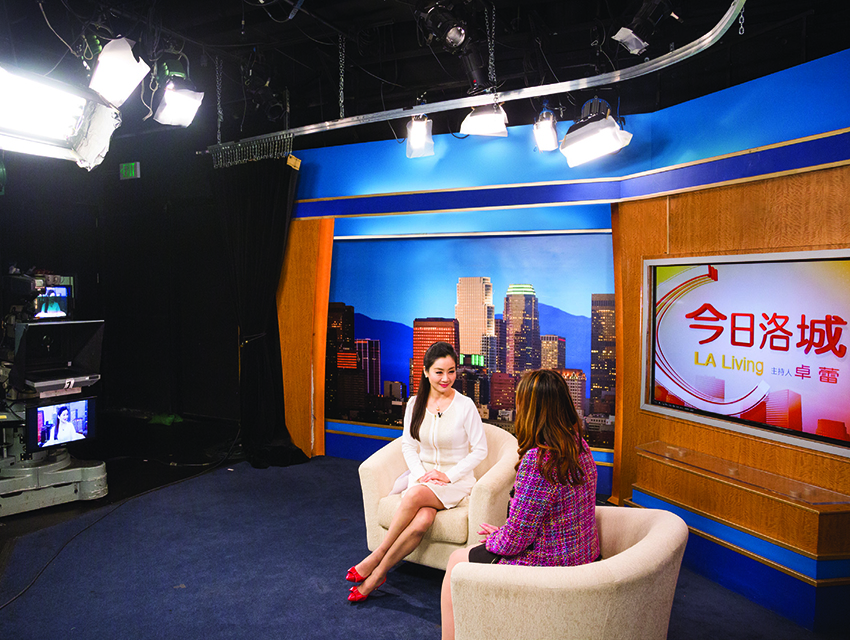 In 2007, Bell Tsou answered an open call for a weather girl at LA18, a TV station based in West Los Angeles that caters to Asian American viewers. American Idol was all the rage back then, so the station’s producers figured they’d tap into the zeitgeist by airing the auditions of their own would-be stars and letting viewers pick a favorite. “It was brutal,” Tsou recalls. “Chinese audiences can be very vocal: ‘She’s ugly.’ ‘She’s too skinny.’ ‘She can’t even speak Mandarin right.’ ” Three harrowing rounds later, Tsou, who had recently graduated with a degree in mass communications from UC Berkeley, emerged victorious. “I had no broadcasting experience,” she says. “I just had my degree and my personality.”

Today Tsou (pronounced “so”) is the host of Tsou LA, a biweekly program created to introduce viewers, largely immigrants from China and Taiwan, to the myriad wonders of Southern California. Slim, with dark brown hair that ends midback, Tsou looks like a China Airlines flight attendant, which she was in her native Taiwan. “I was told that I’d be the ambassador to go to all the places that immigrants—our audience—might be too intimidated to go to,” she says. It’s a fun show, with Tsou gamely trying out the city’s latest strip pole dance workout, say, or popping off a few rounds at the LAPD Academy’s shooting range.

LA18’s offices take up much of the eighth floor of a high-rise near the corner of Bundy and Olympic. Framed commendations from L.A. County, along with cities and organizations throughout Southern California, vie for space with concert tour posters for Rain, the Korean heartthrob, and Taiwanese pop star Jay Chou. There are stuffed animals and Chinese bank calendars and shoes, lots of shoes, worn by the LA18 show hosts, who are almost entirely female. The place has a refreshing sense of democracy, with on-air hosts working and sharing offices alongside the hoi polloi (no stars on doors here). Stroll the halls and you’ll see a microcosm of Asian American L.A., or at least segments of it. The Chinese contingent, the station’s largest, is in the cubicles up front. The Korean news folks are down the hall, past the edit bays and conference room. The Filipino team, the station’s smallest group, occupies offices in between.

In some ways LA18 is segregated, each department separated by culture and ethnicity and language, like miniature K-Towns and Alhambras. There are no Koreans in the Chinese department and vice versa. The Koreans get together after work once a month to fill up on soju and AYCE kalbi at Road to Seoul on Western; the Filipina hosts will, on occasion, hit the Westside happy hours near the station. While everyone at LA18 speaks English, few speak other languages outside of their mother tongue.

But the various groups also run into one another a lot because, well, they have to. Each of the locally produced shows is taped in a single room in the station’s ground-floor studio. The producers, editors, and on-air hosts all use the same kitchen and fridge, the same edit bays. Many of the workers are from China and South Korea and the Philippines; they’re not shy about stereotyping one another, either. “It’s crazy because we’re so multicultural,” says Tsou. “You have to respect and understand each other, but you also have to say it’s OK to have a little fun, to joke around about your own culture and other people’s culture. It’s OK! We make fun of each other all the time.”

Although L.A. has a number of Spanish-language stations, most notably KMEX-DT, Univision’s West Coast flagship, LA18 is the first multilanguage station in the city and the first station in the country to multicast in several Asian languages on digital subchannels. Since it launched in 1977, the station has aired Japanese game shows, Cambodian newscasts, Korean dramas, and so on. More than 5.7 million households in the L.A. area watch its pan-Asian mix of local series and international shows.

Like Univision, LA18 draws from a potential viewer base that, despite a tough media climate, is actually expanding. Asian Americans are the fastest-growing immigrant population in Los Angeles, with education levels and household incomes above the national average. Another advantage is the sheer size and concentration of the market. The Greater L.A. area contains the largest number of ethnic Koreans living outside of Korea and the largest number of ethnic Filipinos living outside of the Philippines. More than a half million Chinese live here, too; in the United States only New York and the Bay Area have more. Compared with the rest of the city’s population, Asian Americans are more likely to be in the 25- to 54-year-old age group advertisers covet most.

None of that, however, kept the station from filing for bankruptcy in January 2012. Dennis Davis, who is 64 and white, was called in to take the position as chief restructuring officer. Because he’d already retired after a long run as president and COO of Pappas Telecasting, a broadcasting company with headquarters in Visalia, California, and stations from Fresno to Vero Beach, Florida, Davis committed to a finite term—18 months. Things were bad. “The day before I showed up, the general manager quit, and so they said, ‘Why don’t you run things for now, and we’ll get someone to take your place in the year and a half that we agreed on,’ ” he says. After assessing the situation, Davis put the company into Chapter 11 and cut the staff from 102 to 67. He has been with LA18 ever since.

To Davis, the station’s primary goal is to serve its first-generation viewers. “We want to stay with our core audience,” he says, “and that’s the people who speak the home language.” For them the station is a lifeline. When they need news about the tsunami that hit their auntie’s home in Manila or where to vote and whom to vote for, they don’t tune in to NBC. They sure aren’t going to Fox News.

To that end, the station also works with nearly every major Asian American service organization and nonprofit in town. In 2013, a quartet of LA18’s on-air personalities broadcast a two-hour telethon about domestic violence in the Asian American community, reaching their collective audiences in Mandarin, Korean, Tagalog, and yes, English. When Korean American Family Services wanted to publicize the need for Korean foster parents in Los Angeles, it went to LA18. Among the thousands of foster parents in L.A. County a couple of years ago, not one was Korean. The station began broadcasting the group’s public service announcements. “That first year they aired it three times a night,” says KFAM executive director Connie Chung Joe. “We saw our calls skyrocket.” In two years the number of certified or licensed Korean foster parents in L.A. County rose from zero to 21. Tune in to LA18 this evening and you’ll see that same spot, a 30-second tearjerker, in prime time.

The challenge for the station is an eternal one for TV as a whole: remaining relevant to its core audience while attracting younger viewers. Do you push Lawrence Welk or Soul Train? NCIS or Gossip Girl? The task is made that much more difficult by barriers of culture and language. Dad doesn’t want to watch a show about cosplay even if he could understand it; his kid doesn’t want to watch news programs about a distant country he barely knows. It’s a balancing act, one performed every scheduled hour.

Giselle “G” Töngi’s Kababayan Today, which began in 2006 and emphasizes pop culture, is part of the station’s ongoing effort to pull in more Asian American millennials. “The show that I host and produce is the only daily talk show for Filipino Americans in North America,” says Töngi. “It’s a big responsibility, but I love it.” This afternoon she’s filming a Thanksgiving shout-out. A film actress and former MTV Asia VJ in her native Philippines, Töngi is 37, with enormous brown eyes and a wide smile. Five of the station’s six Filipino employees have been roped into helping out. Töngi is in front, with the others huddled in a line directly behind her, their arms stretching out from the sides. “We’re trying to look like a turkey,” laughs Kat Iniba, the host and producer of Halo Halo. Töngi surveys the scene and smiles. “This is a lot of brown people,” she says.

You can see similar outreach with Midday Buzz, another daily lifestyle talk show, which was added in 2012, and KA Connection (“the first locally produced Korean variety show of its kind”), which began in 2013. “We’re also looking to do a Dr. Phil-type show for the Asian Indian population,” says Davis. So far, though, LA18 broadcasts just one all-English show, Halo Halo with Kat Iniba, which covers entertainment and lifestyle for Asian Pacific Americans but doesn’t limit its coverage to any single ethnicity. Iniba, who started the program in 2008, was born and raised in Los Angeles. Like many of her Asian American friends, she was taught by relatives that studying medicine (or maybe engineering or law) was the one true path. “But my passion was entertainment,” she says. She’s chatted with Quest Crew, the L.A.-based winners of the third season of America’s Best Dance Crew, and Pasadena’s Wong Fu Productions, the YouTube stars-cum-feature film production company. “I’ve had the Big Hero 6 cast, Randall Park from Fresh Off the Boat,” she says, adding to the list Japanese American directors, Filipina singers, you name it. But it still can be tough finding enough guests to fill a show that airs three times a week, even in this supposedly golden age of Asian American television when there are two—count ’em, two—Asian American shows on TV at the same time (ABC’s Fresh Off the Boat and Dr. Ken).

Iniba marches on, though, as do the other LA18 hosts, because in many ways they’re one of a select few. As Iniba notes, Asian American media outlets, whether ethnic newspapers or print magazines, are a dying breed. Southern California-based print mags like Yolk, KoreAm Journal, Giant Robot, and Audrey all folded. “Even online they’re very hard to find,” she says. “There are some that start, but after a while they just fizzle out. It’s like, Noooo! We’ve gotta be out here. Because nobody else is telling our story.”

Fox News Projected Biden Will Win Arizona. Trump and Co. Didn’t Like It