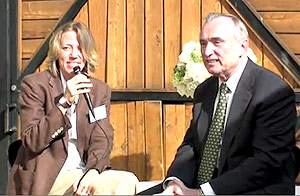 Just a few weeks before he picks up his bags and heads back to New York, LAPD Chief William J. Bratton stopped by the Foundry on Melrose to chat with Los Angeles magazine and 50 or so invited guests about his tenure and what he’s learned these last seven years. We’ve been hosting these Breakfast Conversations for a year now, with people like politico John Emerson and LAUSD Superintendent Ramon Cortines. Candid and 100% Bostonian, Bratton spoke to a group that included former City Councilman (and Bratton booster) Jack Weiss, Board of Public Works Commissioner Paula Daniels, Jewish Journal editor Rob Eshman, Witness LA blogger Celeste Fremon, Dateline producer Josh Mankiewicz, novelist (and wife of outgoing DWP head) Gina Nahai, author and past president of the LA County Board of Education Leslie Gilbert-Lurie, and founder of USC’s Leadership Institute Warren Bennis.

Bratton could probably win public office here, though he said: “To be a politician you have to be part masochist, part sadist, and part showman.” During the talk, which you can watch here, he weighed in on gangs, L.A.’s multi-layered useless bureaucracy, and the aggressive fight his successor will need to wage at City Hall to keep the police department at its current size, let alone its hoped-for expansion. The chief, who’s leaving town November 1 to take a job with a security firm, also reminded the crowd that his lovely home in Los Feliz has “just been marked down…there is an open house I think this weekend.” (For the record it’s going for $1.749 million, and the online ad says it features a “sexy master with great bath.” Showmanship, indeed.)

Some other choice quotes:

“People identify more with the neighborhoods more than they do with the city as a whole.”

“Each neighborhood has its own set of problems and to treat them with one type of medicine just doesn’t work.”

On the future of the force:
“[The LAPD is] an investment…the idea that they are going to cut that investment by 500 officers—you don’t do that in a time of economic distress. If anything, you beef up the one thing that will help stabilize and accelerate when the economy begins to turn around that economic investment back in the city. If crime begins to go up in the city after eight straight years of crime decline those scare investment dollars are going to not come here. They’re going to go someplace else because they can go anywhere they want.”

On his approach to leadership:
“Life’s too short. Get it over with.”

“The New York minute. The reason that phrase is so appropriate for New York is things get done.”

On what’s amiss in L.A.:
“The East coast is much more in your face…Here it’s basically don’t have it out, hold a grudge and try to undermine each other every step and every turn. I don’t know whether that’s the ethos of the movie that’s now basically going into the rest of the society out here.”

“Certainly we know the traffic doesn’t work here…Just to get a carton of milk you gotta get in the car.”

“So much of the image of the city is shaped by crime.”

On his tenure:
“We have seen no indication of economic impact on our crime rate. Shoplifting arrests aren’t up. Stolen cars aren’t up. Crime is down for the eighth straight year in every category. And I believe strongly that a major reason for that is the Los Angeles Police Department—our focus on crime and our growth.”

“Sometimes I feel like a voice crying in the wilderness, but fortunately that voice has been responded to by the public.”