Home Uncategorized The Art of the Breakup 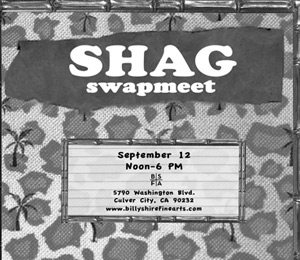 Looks like it’s last call at the epic art party between gallery owner Billy Shire and artist Josh Agle, aka Shag. Billy Shire Fine Arts in Culver City is hosting a “Shag Swap Meet” on September 12th to purge the gallery of all reminders of the retro cool it helped popularize after a falling out between the two titans of the lowbrow art world.

Shire has been exhibiting the works he once described as “modswingingsixtiesratpackagogoloungelizardwatusiwarriors” since 1996 and has long been one of Shag’s biggest supporters. The owner of La Luz de Jesus gallery even wrote the introduction to Shag: The Art of Josh Agle. “It was always,” says Shire, “a handshake deal.”

When the artist decamped for a competing Culver City gallery, Shag said it was “like breaking up with a long time girlfriend” but hoped his relationship with Shire could remain amicable.

I wish the best for both of them, but it kinda reminds me of an old friend who left his spouse in the middle of an argument only to come back and find his belongings donated to the Salvation Army.

Once the paintings, prints, toys, mugs, charms, barstools (Shire once said Shag was the “most merchandised artist since Peter Max”) are sold, it won’t be the end of Shag but a reinvention. “I’ll be exhibiting new work at Corey Helford in November” he told us. “The paintings will be much larger, darker in color and theme, and more personal.  I don’t know how much they’ll appeal to the typical ‘Shag-fan.’ Who knows? Maybe I’m committing double career suicide by changing galleries and style.”