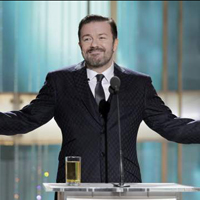 Mother Jones: Obama Worth Less Than $51,000 In “Crock Attack Insurance”
The president’s life, which will be covered by a special insurance policy while he visits Australia this week, is worth about 47,000 cans of Foster’s Beer.

LA Observed: Feniger and Milliken the subject of an ABC sitcom
It’ll be a scripted show about a time when there weren’t many chefs on unscripted shows.

LA Times: Ricky Gervais back on board to host Golden Globes
The Hollywood Foreign Press Association doesn’t know how to quit him.