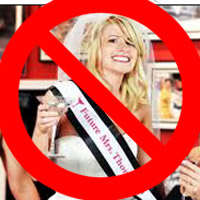 West Hollywood’s most storied gay bar, The Abbey Food & Bar, is hanging up a fierce new sign: BACHELORETTES NOT WELCOME.

According to management, the policy, which goes into effect immediately (and unfortunately for any almost-weds who were planning to live it up there this weekend), is The Abbey’s way of taking a stand in the fight against gay marriage—and a light slap on the wrist for insensitive bachelorettes to boot.

“Every Friday and Saturday night, we’re flooded with request from straight girls in penis hats who want to ogle our gogos, dance with the gays and celebrate their pending nuptials,” reads a shall we say lovingly-worded release from the bar. “They are completely unaware that the people around them are legally prohibited from getting married.”

Saying no to business is an extreme measure for any local establishment to take, and it’s especially surprising coming from one that’s been a hot spot for so many types of people (gay, straight, lesbian, transgender, bisexual, and Mariah Carey) for so long. Despite encouraging other gay-owned and -operated businesses to “institute their own bans as a sign of solidarity under marriage is legal everywhere for everyone,” The Abbey says it isn’t looking to homogenize its customers. “We love our straight girlfriends and they are welcome here,” the release continues, “just not for bachelorette parties.”