Home Film The 5 Worst L.A. Clichés in The Bling Ring That We Wish... 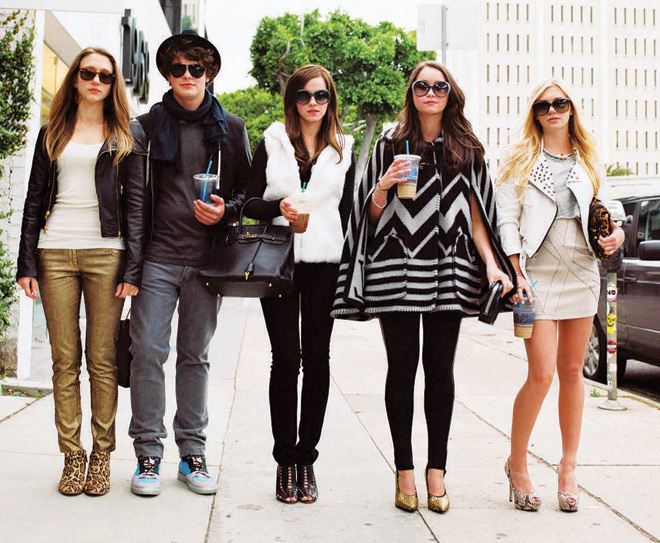 In Sofia Coppola’s latest film (out this Friday), Emma Watson plays a shallow, spoiled teenager from Calabasas who, with the help of her adolescent pals, burgles the empty houses of Hollywood celebrities (Megan Fox, Paris Hilton, and Lindsay Lohan are favorite targets). While it’s based on a true story, Angelenos might find Coppola’s depiction of a fame-whoring, status-grubbing, Porsche-zooming L.A. to be over the top. Well, for the most part. Here are a few stereotypes that are all too familiar.

1. Entitled rich kids shopping at Kitson
In Coppola’s film the menacing teens are criminals packing stolen credit cards—but any group of 16-year-olds in designer sunglasses and skinny jeans is as scary as a biker gang.

2. Mothers who want to be their daughter’s best friend
Much like Amy Poehler’s Juicy Couture-wearing “Cool Mom” in Mean Girls, Leslie Mann painfully plays an Adderall-dispensing nonparent who’s eager to be her hard-partying daughter’s best bud.

3.Magical thinkers who buy into the self-help craze
Watson’s character and her family rely on Rhonda Byrne’s The Secret as their moral compass, which promotes relentless positive thinking. Yeah, we hate that, too.

4. Cheesy Hollywood nightclubs where someone stomps up to a bouncer and declares they’re on the list
To observe this cooler-than-thou caste system, take a drive past Voyeur on Santa Monica and you can get a whiff of desperation from your car window.

5. Upspeak? You know, as a speech pattern?
How do we get the young women of L.A. to stop ending statements as if they’re a question? Coppola’s characters don’t have the answer, and neither do we.