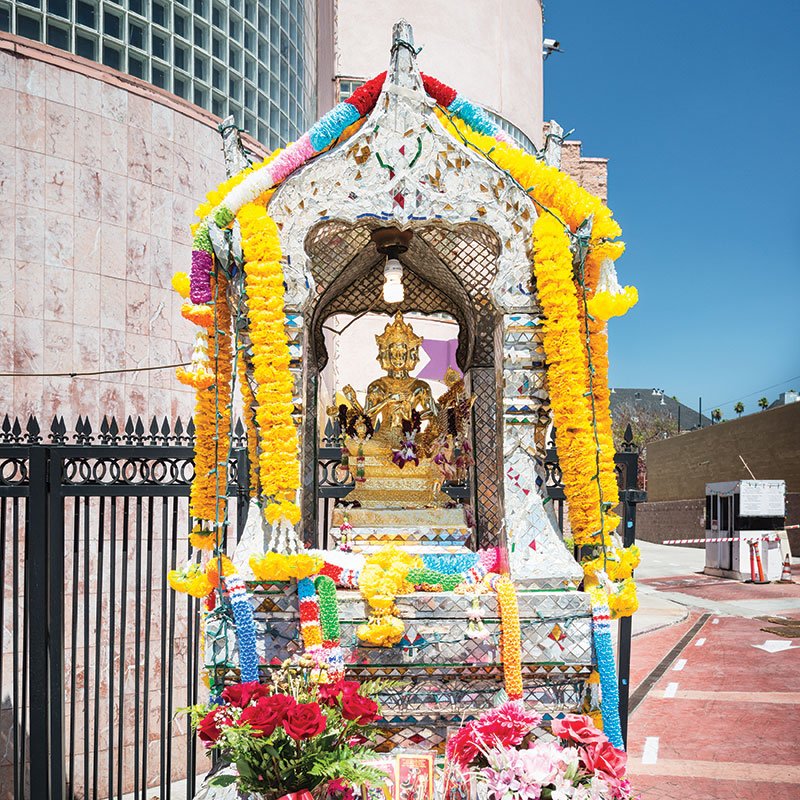 In 1999, the Los Angeles City Council designated six blocks of East Hollywood as Thai Town, the only enclave of its kind in the United States (fitting, when you consider that Southern California has the largest population of Thais outside of Thailand). Two 17-foot-tall gilded statues of apsonsi—mythical half-human, half-lion creatures—mark the neighborhood’s start at the corner of Hollywood Boulevard and Western Avenue (two others at Normandie note its eastern end). The stretch is rich with signposts of Thai culture, housing specialty supermarkets and stores bursting with imported silks and linens. Outside Thailand Plaza, a statue of a Thai goddess sits in a shrine covered with mirrored mosaic tiles and garlands of fresh and faux flowers; at Hobart Avenue two streetlamps held aloft by golden kinarra (angels) light the crosswalk.   But Hollywood Boulevard isn’t the only place with a significant Thai contingent. Here are three other parts of town where you’ll find traces of Southeast Asia.

The beloved North Hollywood restaurant serves  Thai favorites in the San Gabriel Valley, too. Expect authentic middle-of-the-road cuisine (no curdled pork blood here). Start with the papaya salad before diving into a plate of pad kee mao (rice noodles with green chili and mint) or traditional pad thai. If it’s heat you want, try the koong prik paow, aka shrimp with chili paste.

RELATED: The Other Asians

The modest Westwood storefront doesn’t look like much, but inside, swaths of crystals hang from the ceiling and metallic walls glow in soft lighting. Sawadee specializes in traditional Thai massage—which combines Ayurvedic techniques with acupressure and yoga-like stretching—but its menu also includes Swedish, shiatsu, deep tissue, and hot stone varieties. Sneak in before 2 p.m. and an hour-long session will set you back only $40.

The striking Theravada Buddhist temple built in 1977 is dedicated to preserving Thai culture in Los Angeles. Pay a visit to the grounds and you’ll see monks bedecked in traditional saffron-colored robes; for children, the temple offers a course  in introductory Buddhism. On weekends the parking lot transforms into a full-service Thai market, with booths serving street food such as mango sticky rice, fermented Isaan sausage, and khanom krok (coconut custard).

This Thai Restaurant Is Worth the Triple-Freeway Drive to Malibu