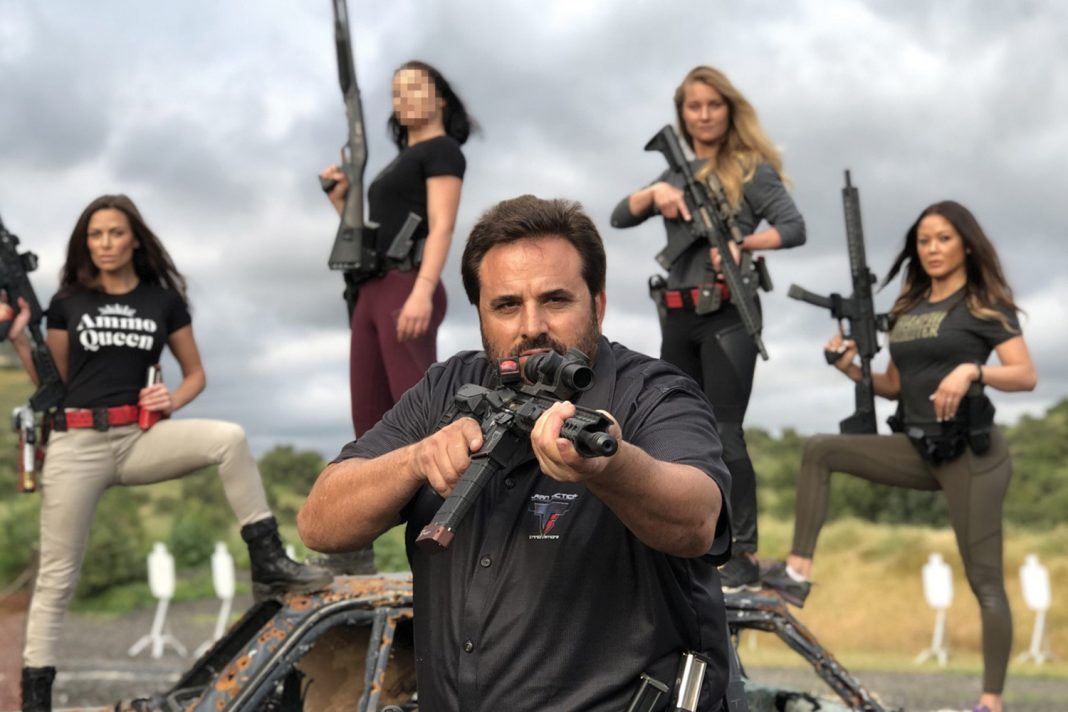 It’s the middle of March, when most of L.A. is shut down over the coronavirus pandemic, but Taran Butler’s gun range is booming. Tucked at the bottom of a dusty hill in Simi Valley, about an hour northwest of Hollywood, celebrities and Instagram models are firing assault-style rifles and shotguns at targets, preparing for the apocalypse. Among them are Swedish American actor Joel Kinnaman and his Victoria’s Secret model girlfriend Kelly Gale, who purchased a pistol to defend themselves in the event that the city descends into lawlessness. An Instagrammer in yoga pants and a pink mask poses for a photo that garners over 19,000 likes. It’s a scene that could exist only at Simi Valley’s Taran Tactical Innovations, a star-packed haven of conservative America, where liberal Hollywood goes to get locked and loaded.

The gun company is the personal fiefdom of Butler, a portly 23-time Southwest Pistol League champ who has earned a national reputation as Hollywood’s go-to weapons trainer. Butler is the guy that the studios hire when they want to bring their zombie killers and assassins up to snuff. His YouTube channel is crammed with videos that have amassed tens of millions of views of the stars he has coached—among them Halle Berry, Michael B. Jordan, and Shemar Moore—frolicking with AR-15-style rifles.

“A lot of liberal people that before were like, ‘Nah, I don’t need a gun’ are over here buying guns hand over fist,” says Butler, who has turned a parking lot next to the Ronald Reagan Presidential Library into a home for celebrity gun culture. One prominent Second Amendment activist even praised it as a “safe space” for actors to buck Hollywood’s perceived antigun bias. “Mom and dad bought this in ’77. It used to be a place to park trucks,” Butler says. “I turned it into this crazy shooting man cave.”

A few months ago a sexual harassment claim threatened to upend Butler’s kingpin status in the conservative gun world that he dominates with his 525,000 Instagram followers. But the controversy appears to have faded since the pandemic. Along with panic purchases of toilet paper and hand sanitizers, firearm sales jumped all across the nation, with lines circling outside gun shops. Butler, meanwhile, was cashing in on his niche market—Hollywood elite and Instagram influencers. “I sell them guns with a laser flashlight on it, so that way it’s intimidating,” he says.

Butler’s ranch looks like a cross between the Playboy Mansion and the set of Gunsmoke. Almost all the shooting instructors here are female, a team once dubbed Taran’s Angels. He brags about his ability to turn photogenic women into “rock stars” of the shooting world—which he accomplishes by sharing Instagram photos of babes with bazookas with tens of thousands of salivating Instagram fanboys. Take, for example, Toni McBride, a cheerful LAPD officer whom Butler gifted with a custom multithousand-dollar pistol, or Chrysti Ane, a six-pack-baring, yoga-pants-wearing gun lover hailed online as the Gun Goddess. “That’s what I’m known for,” Butler boasts. “Beautiful girls who shoot as good as they look.”

But the adolescent boy fantasy collided with the #MeToo movement in January. At the annual firearms trade convention known as the SHOT Show, held this year in Las Vegas, a leaked video spread like wildfire in the conservative gun community. In the video, Butler, standing behind the camera, does a weaselly voiced impression of the Lord of the Rings character Gollum when he asks his most prominent shooter, Jade Struck, to show her “precious,” referring to her vagina, among other sexual comments. Struck, known for her wide smile, jet-black hair, and sharpshooting skills, nervously laughed off Butler’s propositions, but she apparently was not amused. “I was very young and naive and led to believe that this sort of thing was normal, expected and required to succeed in this industry,” she said in an online statement posted after the video surfaced. She said the video was taken several years ago, when she had recently turned 18. Playing along with Butler’s sexual antics, Stuck said, was “simply a condition of my employment.” Struck declined to comment for this story.

Butler initially posted an apology, calling his actions “indefensible” and a “painful lesson.” Days later he removed the statement and launched a vitriolic campaign against Struck, accusing her of “playing victim” while she moved into his home and was supposedly gifted a car. Butler defenders soon piled on. “You had 1,000 followers when I met you and because of [Taran Tactical Innovations] you now have 150k,” Jennifer Irene, one of Butler’s instructors, posted on Instagram. “You never finished high school.” Since the scandal erupted, two of Butler’s major sponsors, Italian shotgun maker Benelli and Michigan-based firearms accessory manufacturer Trijicon, quietly ended their lucrative relationships with him. But the controversy has done little to diminish his conservative fan base. Most of Butler’s female shooters have rallied around him and condemned his young accuser. Other than some mostly anonymous memes that blast him as #TaranWeinstein, most stars of the shooting community have held their fire. Butler is one of the few crossover successes who straddles liberal Hollywood and the world of tactical culture, a lifestyle that blends macho Navy SEAL aesthetics and gun babes with conservative politics. Besides being a shooting champion, his claim to fame is teaching Keanu Reeves how to shoot like a professional for the John Wick action thrillers, which feature the actor performing fantastical ballets of killing while barely uttering a sentence. In 2016 Butler posted a 37-second clip of Reeves blasting away like a video-game character; the video quickly went viral and sent Butler’s profile skyrocketing in the gun community. John Wick director Chad Stahelski—a former stuntman and frequent guest of the Simi Valley range—“changed my life,” Butler said in a Facebook post.

The film franchise not only made Butler the de facto trainer to the stars, it also gave him free product placement—his line of customized guns, branded “John Wick” without studio permission, are featured prominently in the movies. All the weapon makers “wish they had their gun in John Wick,” says Karl Weschta of Independent Studio Services, a major prop house.

Surrounded by John Wick weapons—outfitted with high-capacity magazines illegal in California—Butler was warmly greeted at the 2019 NRA convention in Indianapolis by one of his latest customers, Donald Trump Jr., who emerged from the crowd to embrace him. “Don got a John Wick Combat Master as did his brother Eric, custom built with their names on it,” Butler told the crowd. “It’s an honor.”

Some of the celebrities Butler has trained, like Dwayne “the Rock” Johnson, use their prominence to loudly advocate for gun control. But Butler is confident that as long as Hollywood is obsessed with guns, its stars will seek him out for training, regardless of their political inclinations. “I’m not worried because [guns] have been in movies since the beginning of movies,” Butler said at his ranch. The gunfire quieted as dusk fell over his range. “In the end Hollywood wants to make money, and the audience wants to see action.”

RELATED: The Coronavirus Has Inspired a Run on Guns in Los Angeles