Home Business Tale of The Tape 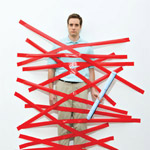 If you want a rough approximation of hell on earth, try opening a restaurant in the City of Los Angeles. It’s not just the dozen or more government agencies that need to sign off on a project—or the lack of communication between the Building and Safety guy who says that the electrical outlets are fine and the Fire Department guy who says that they have to be replaced. It’s not even the intramural squabbling between the Planning Department and the Area Planning Commission over whether to require six or eight parking spaces. What makes L.A.’s system so horrible—often dragging out approvals for a year or longer—is an institutional disregard for anyone running a business. In this world, bureaucracy is what rules, and if you don’t like it, well, tough.

Certainly there have been reform efforts. Three years ago Mayor Antonio Villaraigosa and city council president Eric Garcetti trumpeted a new plan to trim the number of departments that business owners must deal with from 12 to 2. “We are seizing the opportunity to clear the weeds of bureaucracy that can slow economic growth and job creation,” Villaraigosa said in a press release announcing the “12 to 2 Building Reform Plan.” And then…nothing. The muckety-mucks stopped paying attention. So did the department heads further down the chain who were supposed to implement the changes. The program simply died—and with recession-related job cuts at several agencies, the permitting logjam only grew. The city’s Office of Economic and Business Policy summed up what went wrong in a recent presentation: “No resources. No collaboration. No accountability. Underestimated complexity.”

When a small business owner is held up by nonsensical regulations, the fallout can be considerable, not just for him or her but for the entire L.A. economy. The business loses out on thousands of dollars in potential sales, which means that people aren’t hired, suppliers don’t get work, and the city doesn’t receive tax revenues—no small matter given an escalating budget deficit. If business owners have to pay rent while waiting for all the city permits to clear, they could be hard-pressed to make up for the losses once the operation finally does open. Sometimes the cash runs out before the permits are in hand. Sometimes an owner pulls up anchor and moves to a more accommodating area. “Los Angeles is one of the most hostile cities for entrepreneurship and small business that we’ve come across,” says Michael Bindas, a senior attorney with the Libertarian-leaning Institute for Justice who last year surveyed L.A.’s regulatory climate. “It’s strangling businesses with red tape, and it pretty much affects every calling.”

No one would argue about the need for basic rules and regulations. When visiting my favorite Italian restaurant, I want to know that I won’t get sick because the refrigerator isn’t working, or that I won’t break my neck on a slick men’s room floor, or that the emergency exits won’t be locked in the event of a fire. Government helps provide those assurances. At some point, though, the process meandered beyond legitimate concerns into a zone of capriciousness. Madelyn Alfano, owner of the Maria’s Italian Kitchen chain, thought she would avoid a few of the permit steps by leasing a space that had already been used as a restaurant in a 21-story downtown high-rise. “The plumbing inspector comes in and says that I need to do a water survey of the entire building,” she tells me. “That’s a little unreasonable—to see how much water is being used on 21 floors. So I went to the head guy downtown and asked him, ‘Does this sound reasonable to you?’ And he looked at me and smiled and said, ‘No, it doesn’t seem reasonable.’ So he signed off on it, and I didn’t have to do the survey.”

The thing about bureaucracies is that once built, they’re next to impossible to dismantle. The paper pushers who work behind the counters and out in the field are used to interpreting rules their way, regardless of how absurd the procedures may be for everybody else. That’s a big reason the 12-2 program didn’t take root. Another explanation is the scope of the dysfunction: Each department that issues permits has its own set of codes—and they’re long, complicated, and often contradict one another. “An applicant comes to us, and we say, ‘You need a grease trap but not a grease interceptor,’ ” says Raymond Chan, deputy superintendent of the Department of Building and Safety. “But the Bureau of Sanitation says, ‘No, no, no, you need a grease interceptor.’ ” Both devices separate grease and solids from kitchen wastewater, but grease traps are cheaper and easier to install. Insisting on an interceptor can add tens of thousands of dollars to the cost of a project, and it’s frequently not necessary.

Much of the back-and-forth is played out on the fourth floor of L.A.’s Department of Building and Safety permit office on Figueroa Street, a couple of blocks from the Music Center. This is usually the first stop for anyone starting or expanding a business in the City of Los Angeles, and it’s daunting. On a typical weekday morning dozens of people with architectural plans wait their turn on metal benches that circle the department’s various counters (electric, plumbing, etcetera). Once called, they walk up to the counter where their blueprints are examined for a host of issues, such as whether the fire sprinklers are in the right place or whether the front door should open in or out. Decisions can be appealed, but that requires more submissions and more waiting. Besides, approvals are also needed from the Bureau of Sanitation, the Fire Department, the Bureau of Engineering, the Department of Water & Power, the county health department, the regional Air Quality Management District, and if a liquor license is necessary, the California Department of Alcohol Beverage Control. On occasion the police department is involved as well as the Community Redevelopment Agency, the Planning Department, and the Office of Historic Resources. L.A.’s regulations are like its landscape—sprawling and poorly planned.

Eddie Navarrette knows all about the mess—he’s among the dozen or so “expediters” who are hired by restaurant owners to stand in lines and deal with the permits and inspections. “The first thing I ask potential clients is if they’ve signed a lease,” says Navarrette, who is known in the trade as “Fast Eddie” (he got his nickname playing in a rock band). “If they have a lease, there’s no turning back. If they don’t, I’ll sometimes discourage them from moving forward.” A big problem, Navarrette explains, is that many of the counter people who make judgments about construction work hardly ever pick up a hammer themselves. “They’ll tell you that they’re right with very convincing attitudes,” he says. “But they’ll tell me something that I know is not right.” Erin McKenna, one of Navarrette’s clients and the owner of the L.A. vegan bakery BabyCakes NYC, jokes that the city should establish a Department of Rules, Sanity, and Accountability. “Before you go to argue, look at your case and then subtract all the common sense,” advises McKenna, who spends most of her time in New York. “Then you should be fine.”

What comes up over and over again about L.A.’s bureaucracy—and what truly drives businesspeople nuts—is how blinkered each office can be. Larry Galstian, chief inspector of Building and Safety’s Inspection Bureau, had heard about his own department’s miscues but not about those of other agencies. He says he was “stunned” when a group of restaurant owners unloaded on city officials a little over a year ago, a low point in the relations between the business community and city hall. “We didn’t know what was going on because we didn’t speak to any of those other departments,” Galstian says. “We reviewed plans, approved them, they went to the next agency, and we just waited until they came back to us.”

After hearing the complaints, officials from several departments developed a pilot program with an uncharacteristically cheery name: Restaurant and Hospitality Express. The idea was to speed up the time it took to file for permits with various departments by, among other things, assigning a case manager to each applicant (one restaurant manager was shocked when his cell phone rang and it was an inspector asking if he could be of help). As of late last year more than 100 restaurants were in different stages of the program, and the reviews have been good. Unfortunately, the old infrastructure remains essentially in place, with restaurant owners still having to deal separately with city, county, and state offices—and each marches to its own code book.

The real solution is a top-to-bottom overhaul, something that Deputy Mayor Austin Beutner has been focusing on since he was hired by Villaraigosa at the beginning of 2010 as a kind of business and economics czar (he’s also been the interim general manager of the Department of Water & Power). Beutner, a former investment banker with no government experience, provides financial knowledge, a low-key temperament, and newbie optimism—a combination that seems to be working reasonably well; he’s already pondering a run for mayor in 2013. For him, it’s a simple proposition: The more business he can help generate, large and small, the better the city’s finances will be.

He isn’t dwelling on the ill-fated 12-2 idea (“That one predates me,” he says) and is instead looking to incorporate success stories like the restaurant program into a streamlined plan for all businesses that need city approvals, from dry cleaners to developers. With local municipalities retrenching, this could be a good time to consolidate operations and rethink the way that government works with business. “We’re dealing with a couple of decades, at least, of bad policy and bad practice,” Beutner tells me, punctuating his pitch with management buzzwords like “process” and “transparency” and then explaining how new technology will ultimately save the day by keeping everyone connected.

But this isn’t an MBA class—it’s government bureaucracy at its very worst, and even incremental reform will be a long, bloody slog. Fixing the problem means examining what everybody does, not to mention how well they do it, to determine where the system, in Beutner’s words, “can be reorganized and reoriented.” It also means firings and transfers and massive amounts of retraining, along with needling county and state officials to do the same with their people. Most of all, it means changing attitudes. “We’re making progress,” Beutner says. “You have to change the process so that various departments can do things in parallel—work side by side with each other, share the same information. You have to find people who say, ‘OK, I get it. Our job is to try to foster a better environment for business.’ ” He’s clearly on the right track, but I’ll believe it when I see it.