Home Crime Tainted! The High Price of Being Wrongfully Convicted 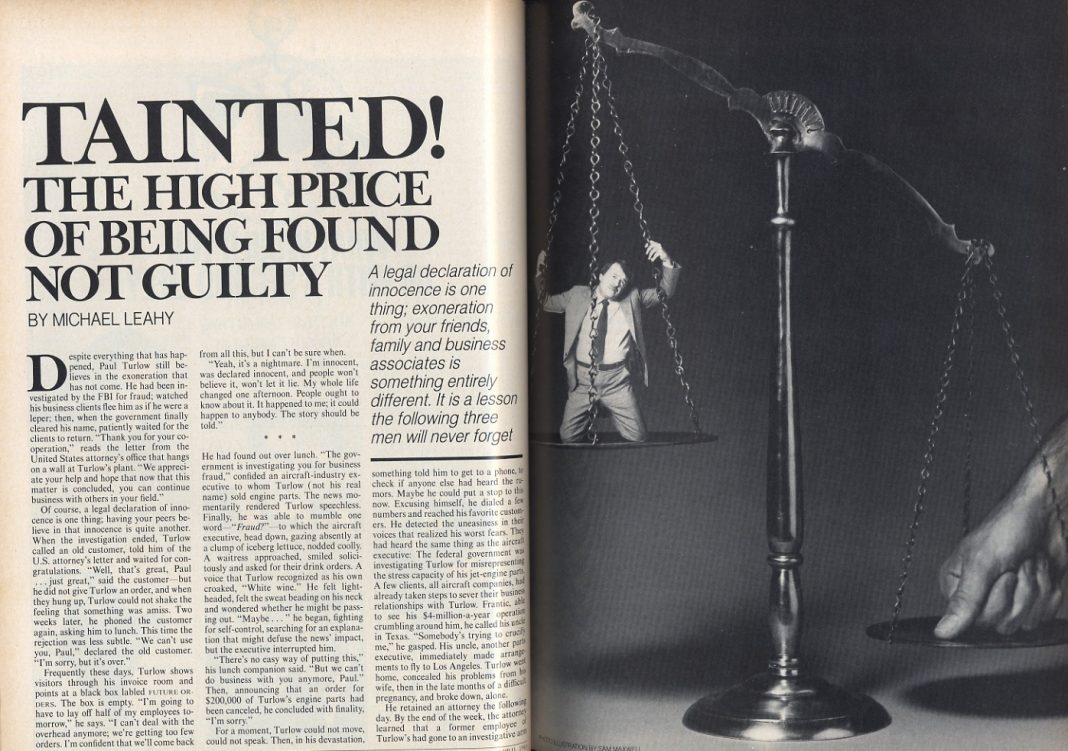 What can be done?

What can be done to put the victims of erroneous investigations, prosecutions and convictions back on their feet again?

Steve Wilson, formerly of the U.S. attorney’s office here and now a lawyer for the Los Angeles firm of Hockman, Salkin and DeRoy, believes that defense attorneys can take the lead in changing the way the government treats such victims. “The defense lawyer has to vigorously assert these claims upon the prosecution,” says Wilson, “if it expects to get anywhere in helping the client. The prosecutors won’t do it on their own.”

“In those rare situations,” Wilson continues, “when an investigation is totally without any basis in fact, the prosecution ought to acknowledge, not necessarily publicly, but privately, to the subject’s business associates, for instance, that he is innocent. The matter shouldn’t just die on the vine. There should be a letter from the U.S. attorney’s office to the client that the case is closed and that no evidence of wrongdoing was found.”

Yet Wilson warns that even with such a policy, the number of letters issued on behalf of former suspects would likely be small. “Prosecutors might often have problems writing letters of that sort because they often believe not in the total innocence of a person, but rather that the evidence against him was inconclusive. A business crime isn’t always susceptible to black-and-white determinations. When it does happen, however, I believe that the government has a duty to help the people involved.”

What concerns Wilson as much as anything else is the length of many investigations. “Investigations should be concluded as quickly as possible,” he says. “There are often too many delays, and the result is that a tremendous strain is placed upon the subject and his relationships. That should be corrected as soon as possible.”

Robert Brosio, chief of the criminal division of the local U.S. attorney’s office, cannot recall an instance during his 20 years as a government prosecutor when he sent a letter on behalf of a former suspect. But he offers that the U.S. attorney’s office might consider writing a favorable letter to a former suspect’s business clients if “we were convinced that he was innocent. We might make a phone call, too, if the conditions were right.”

Why hasn’t this happened yet? Certainly in the last 20 years someone had to be a victim of an erroneous prosecution or investigation. Hasn’t anyone ever inquired about the well being of suspects after investigations against them have been dropped?

Brosio clears his throat and delineates the responsibilities of the U.S. attorney’s office: “We are here to prosecute clearly and effectively. That’s our chief responsibility. No, we don’t check on people afterward in that way. There is a matter of time involved, of course; we’re busy; there are limits to what we can do. Besides, it’s not always clear to us that someone is innocent, and we’re not going to send a letter if we have doubts.”

Paul Turlow’s lawyer, a former government attorney himself, believes that the real reason behind the reluctance of the U.S. attorney’s office to send letters of apology to former suspects is its fear that such letters may provide the basis for suits against the government. “Of the U.S. attorney’s office says that an FBI investigation was groundless,” observes the attorney, “it might leave itself open to a suit for interference with constitutional rights. It wouldn’t want to take that risk.”

Robert Brosio hears a lot of criticism in his job. He sighs and talks about human foibles. “We are a very professional group,” he says, “but as with anything, there is always the chance of mistakes. We’re open to dealing with them.”