Home A Day in the Life This Old-School Barber Offers Haircuts, Shaves, and Time Travel 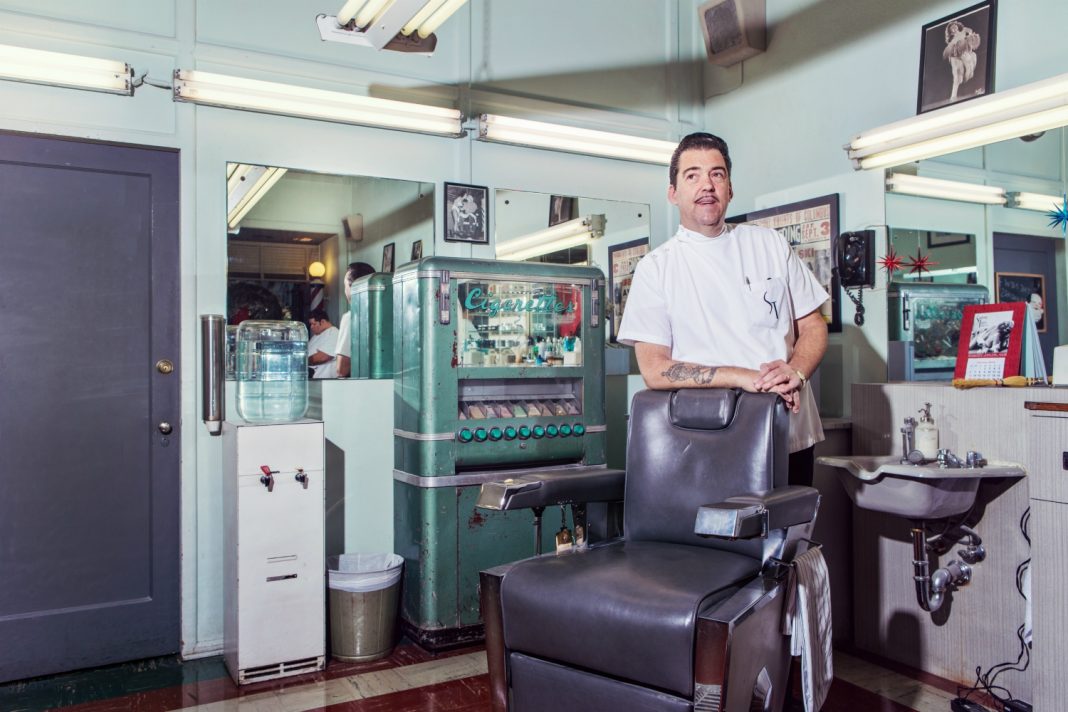 As told to Chris Nichols.

The shop has been here on Hollywood Boulevard since 1947. The first owner gave it a remodel in the late ’50s with beautiful asbestos floors, new chairs, and a back bar. I worked here when it was called Andy’s and learned from Danny Rivas, who had been cutting hair since 1958. I’m very happy I got to work under somebody who had been doing it in the golden years.

Opening up the shop consists of rolling out the awning, putting up the pole, and heating up the towel warmers. Then I turn on the music and get to work. I’ve been an obsessive record collector since my teens: early rock and roll and R&B stuff, and Jackie Gleason’s “music to get her in the mood” albums. It’s an old shop, and I’ve sort of maintained that aesthetic and the music really drives it home. I like to play Henry Mancini soundtracks. He did the score for Touch of Evil, a very tense film noir, so I have to be careful not to put those on when I’m about to lay a guy down for a shave. You don’t want them white-knuckling it.

You have to ask a lot of questions before you hit the switch on those clippers. Most customers have their specific sort of thing they like. After a while you inherently know what works and what doesn’t on different types of hair and different-shaped heads.

I have an old hair chart from 1960 that has eight haircuts on it. A customer might say, “I want the ‘Ivy League’ but a little longer.” There’s one called the “Hollywood Flattop.” It’s swept back on the sides, and you can land an airplane on top. Once in a blue moon someone will get adventurous and try that one. I love doing them. The symmetry is unnatural, but when they’re done right, they look great.

I’ve been a technical adviser for movies and TV shows. I gave Santa Claus a haircut in a Snickers ad. He came in with long hair and a beard and left with a handlebar mustache and a “high and tight.” Mad Men shot an episode here, and they wanted me to show this actor how to use a neck duster. You do it all day, and it becomes second nature—it’s like tying your shoes—but I had to break it down and explain what your fingers are doing.

I’ve had people from around the world who have seen our Instagram and make a point of coming here. I have pictures on the wall of James Cagney, Robert Mitchum, and Lawrence Tierney. Tierney usually played a heavy—he came into the shop when I was starting out. The one thing I hear more than anything is, “I have to bring my dad here because this is the kind of shop he would have gone to when he was young.”

RELATED: Where Was There a Drive-In Theater in Los Feliz?

It’s One Final Hair-Raising Show in L.A. for Michael Butler

These Barbershops Are Helping Dudes Tame Their Pandemic Manes