Home Uncategorized Suze Orman Doesn’t Want Your Vote, But She Would Like Your Attention,... 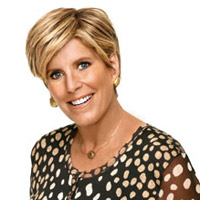 Financial guru and Emmy Award-winning television host Suze Orman lives in San Francisco, but she’s headed this way for O You!, O, The Oprah Magazine’s day-long, expert-filled confab taking place at the Los Angeles Convention Center on October 20. We called her up to talk money and politics and found out why Angelenos should stop buying our images, why she’ll never run for office, and where she’s excited to spend her hard-saved money in L.A.

We do big money-wasters here. We lease cars, rent apartments, use our credit cards at 7-11… Have you noticed that Angelenos are especially bad with money?
I have not noticed that. What I have noticed though, is that you don’t need to segment it [by city] anymore. The truth of the matter is, universally speaking, women are out of touch with their money.

According to DQNews, the median price for a Los Angeles home in August was $335,000. For someone looking to buy here, what’s the number one way to save for a down payment that could be upwards of $50,000?
The number one way to save for anything is to always live below your means but within your needs. The problem for most people, especially in a city such as Los Angeles, is the more money you make, the more you spend. The more money you make, the more money you want to show people you have. When it comes to buying a home, you cannot use old real estate values, thinking this is a million dollar house that I’m getting for $300,000. Real estate will never appreciate that fast again. You have to know that you can afford the mortgage, the property taxes, the insurance, the maintenance costs—and you better factor in earthquakes.

Have you ever considered running for political office?
No, because I’m not sure anyone in political office can really dictate change. There’s too much fighting going on for change to ever come about. I think I have more affect on America by changing the people and their habits and the way they use their money.

What makes fiscal responsibility a women’s issue?
Women make up more than 50% of the workforce. There has been an absolute switch in the dynamics of making money, having a job, and who really is the breadwinner of the family. [The number] of single mothers is rising. Women are emerging as the force to contend with. We’re the force that is holding up the economic powers of the world.

Do you see the gap between how much women earn and how much we know about our financial well-being growing?
Yes. And here’s the bottom line: You’re never powerful in life until you are powerful over your own money—what you think about it, what you do about it, how you invest it. A woman, even though her economic status is changing, her psychological conditioning says it’s your job to take care of your spouse, your life partner, your parents, your children, your brothers, your sisters, your employees, and your employers, and you are to think about yourself last. Women are still writing themselves out of the equation. The important thing is for women to learn to put themselves first.

There¹s a domestic debate taking place now over how much we should value individual success. Are you making a political point in saying women should put themselves first, or is this just a matter of rebalancing gender roles?
You cannot hold up others until you can hold up yourself. Individual success is extremely important because [without it], if the community ends up failing, you end up failing as well. It is my belief that women need to be successful both individually and in the support of other women to also become individually successful. When a bunch of individuals have success, then you have an incredibly strong community.

Tickets to O You! aren’t cheap. They cost $150. Why is it worth the investment?
I’ll be the first to say if this is something you have to put on a credit card, you can’t afford to come to this event. But life can become about how you can become a stronger individual and how do you feel better about who you are. That’s what happens at an event like this.

What do you typically splurge on when you’re in L.A.?
I can say this honestly: nothing I do is a splurge. I’ve been so responsible with my money and careful with it that no matter what I do it would be very difficult for me to ever splurge.

So you can afford to spend what you’d like. How will you do that here?
I always like to go to a restaurant that I’ve never been to but find unusual. I look for experiences that I can’t give myself at home. This time I have reservations at The Bazaar. I’m so excited!