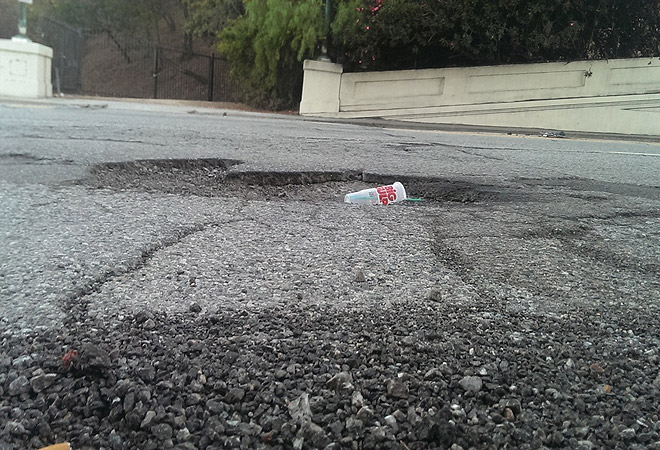 Lawmakers will examine the practicality of a $3 billion proposal to fix the ubiquitous potholes on Los Angeles’ streets, part of an effort to chip away at a 60-year backlog of repairs.

The proposal, dubbed “Save Our Streets L.A.,” was put forth by city councilmembers Mitchell Englander and Joe Buscaino, who pointed out that 38% of L.A.’s 28,000 lane miles need to be completely reconstructed.

Potholes are a problem, to be sure, but a $3 billion one? According to Englander and Buscaino, we’re lucky it’s not more—although waiting to act will propel the estimate even higher (they speculate it could double within the decade). Needless to say, Angelenos are eager to know where such a sum will come from. City officials have suggested the money might flow from a potpourri of sources: a property tax, or perhaps borrowing against future sales or gas tax revenues, according to the Los Angeles Times.

The City Council has until July 16th, 2014, to come up with exact language for the plan, especially if they want to see it on the November 2014 ballot. If it receives the two-thirds vote needed for approval, it’s estimated that the project will take ten years to complete.

L.A. Councilmembers Urge the Governor to Declare a State of Emergency on Homelessness

With El Niño Here, the City Gets Proactive on Potholes