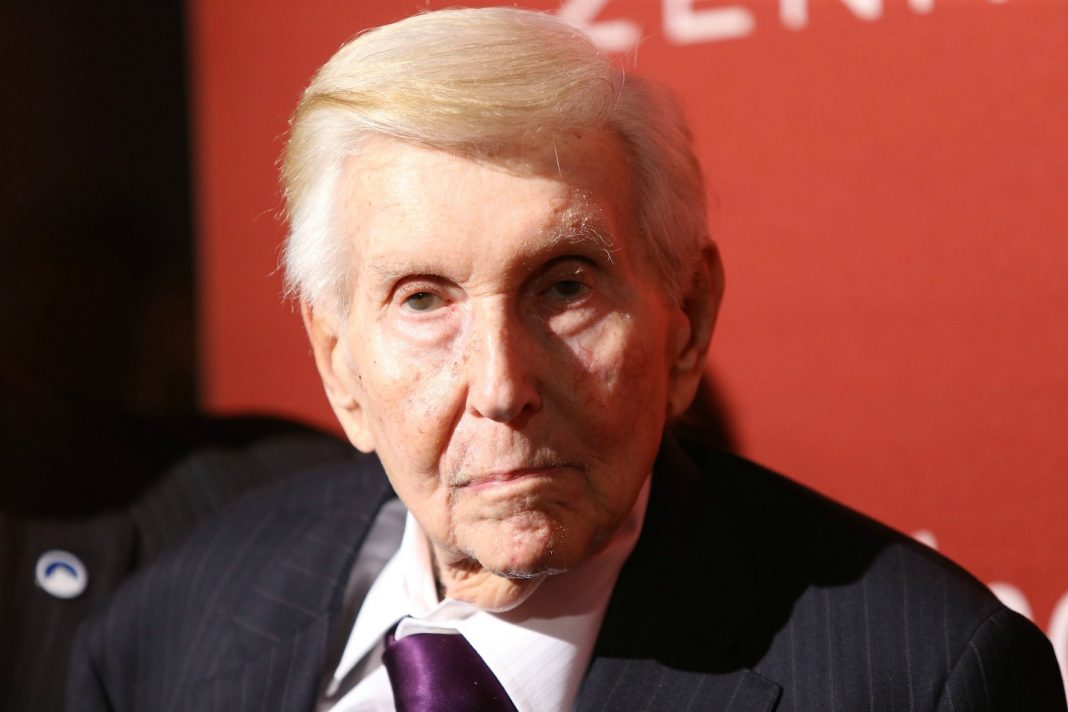 Sumner Redstone, the powerful, controversial media mogul who was the longtime controlling shareholder of CBS and Viacom—now merged into ViacomCBS—passed away at 97 on Tuesday, August 11, though his passing wasn’t disclosed until Wednesday. Redstone, who’d been in declining health for a number of years, was at his 15,000-square-foot mansion in the Beverly Park private gated community off Mulholland Drive when he died. While some have assumed he became stricken with COVID-19, The Hollywood Reporter says that wasn’t the case.

Redstone was born in Boston in 1923 to a family of meager means; in his 2001 autobiography A Passion to Win, he claimed their apartment didn’t even have a toilet. Later on, his salesman father Mickey got a $50,000 loan from a Boston mobster and used the money to start buying theaters and nightclubs in Boston and on Long Island. Sumner attended college at Harvard, where he did so well that he got involved with cracking Japanese codes during the second World War. After law school, a San Francisco judge hired him as a clerk, contributing to his later legal acumen. He went on to work for a U.S. attorney, then practiced law on his own.

Redstone grew tired of working in law and took up with his father’s movie exhibitor business in the mid-1950s; it wasn’t long until he started buying up movie theaters on the East Coast. During that period, he nurtured his famous credo about success in film: “Content is king.”

As Redstone began to interact with studio heads, he became adept at entertainment biz deal making and was named CEO of his father’s company, National Amusements. In the late ’80s, Redstone added to the portfolio by purchasing Viacom, then Paramount Pictures. Redstone’s company also then owned Madison Square Garden, the New York Knicks, the New York Rangers, and even divisions of the book publisher Simon & Schuster. In 1999, he bought CBS from Westinghouse for a cool $37 billion.

Along the way, there were high-profile lawsuits and feuds galore with studio chiefs and titans like Barry Diller, Mel Karmazin, and John Malone. Redstone credited his background in law and legal matters for a lot of his subsequent successes in court.

Redstone ran his media empire with an iron fist, old-school style, not unlike business titans William Randolph Hearst or J. Howard Smith II, feared by many and with a reputation for litigiousness. Forbes reports that his net worth was $3 billion as of August 10. Redstone’s landmark accomplishments mostly revolve around his fierce business practices and tough-guy persona, which included surviving a 1979 hotel fire and sustaining third-degree burns over 45 percent of his body. In the ’50s, he became known in Hollywood for suing to break up the studios’ hold on theatrical movie distribution.

During his long tenure running Viacom and Paramount, Redstone oversaw the making of everything from the Transformers franchise to Al Gore’s landmark environmental documentary An Inconvenient Truth. He’s also credited with pushing forward the careers of Martin Scorsese and the Coen Brothers.

Innumerable anecdotes about Redstone have become the stuff of Hollywood lore. One story involves Redstone actually firing Tom Cruise from Paramount Pictures in 2006 after blowing up over Cruise’s famous, freaky couch jumping during an episode of The Oprah Winfrey Show. At the time he said, “[Tom’s] behavior was terrible,” and said the actor was getting paid “ten million, on the lot, for doing nothing.” They eventually reconciled.

In his later years, Redstone became more infamous for his relationships with women—and their relationships with his money—than for his hard-charging leadership style. He’d been married twice, to his first wife for 50 years and his second one for seven. For years, two of Redstone’s girlfriends, Manuela Herzer and Sydney Holland, battled with Redstone’s daughter, Shari Redstone—now chairman of the board of ViacomCBS—over control of the elder Redston’e empire. In 2015, The Hollywood Reporter published a notorious story by Tim Jensen, who worked for Redstone as a driver and confessed that a huge part of his job was delivering large envelopes stuffed with cash to a variety of women all over town, which added up to about a million dollars.

In 2015, Herzer filed a lawsuit challenging Redstone’s mental competence, a judge dismissed the case when Redstone submitted video testimony saying he didn’t want anything to do with the woman, and repeatedly referring to her as a “fucking bitch.”

In his autobiography, Redstone penned a line that might sum up his entire career: “When your life depends on it, you must wage war.”

Redstone’s only trustee is said to be daughter Shari and her son Tyler.

RELATED: Once Dismissed as a Lightweight, Shari Redstone Is Now the Most Powerful Woman in Town

Once Dismissed as a Lightweight, Shari Redstone Is Now the Most Powerful Woman in Town