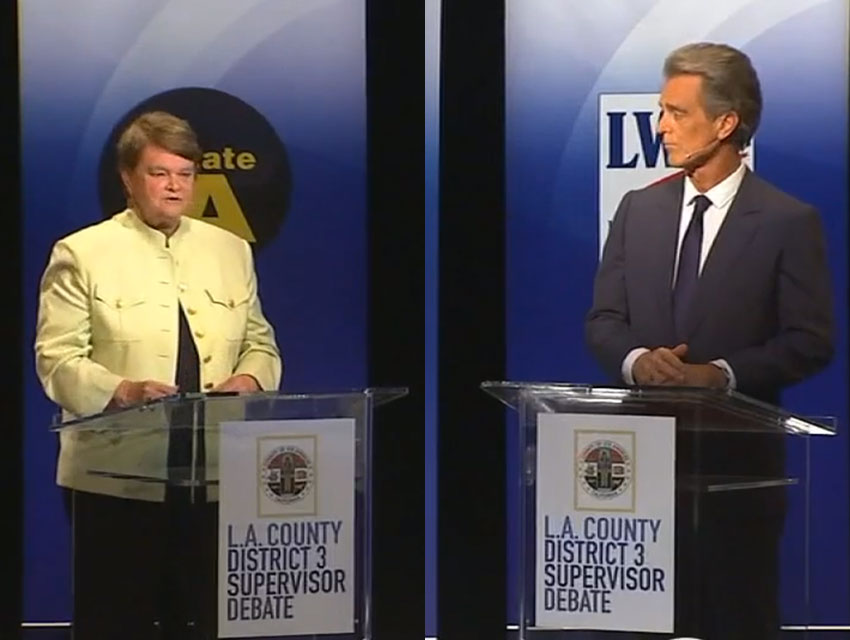 Los Angeles County Supervisor Zev Yaroslavsky will leave office in December, and when he does, either Sheila Kuehl or Bobby Shriver will replace him, joining an elected group of officials described by one lobbyist as “five of the most powerful politicians in the United States.” Indeed, L.A. County supes represent nearly 2 million people each—that’s more than congressman and most mayors. Which candidate deserves your vote on Tuesday, November 4? Catch up on their experience, their positions, and their priorities here, then decide.

Who is Bobby Shriver?
He is a former mayor of Santa Monica who, yes, is Maria’s brother. He is also the nephew of our nation’s 35th president. Born in Chicago to Sargent Shriver and Eunice Kennedy Shriver in 1954, Robert Sargent “Bobby” Shriver III is the oldest of five children (besides Maria, there’s Timothy, Mark, and Anthony). He attended Yale and graduated cum laude with a B.A. in American Studies and followed up with a degree from Yale Law School in 1981. Aside from his day job as an attorney, a stint in venture capitalism, and a five-year investment in the Baltimore Orioles, he is also the president of RSS Inc., a film, music, and philanthropy company, and has produced several films (including True Lies, which starred his ex-brother-in-law and former Governator Arnold Schwarzenegger). He and his wife, Malissa Feruzzi, live in Santa Monica with their daughters, Natasha and Rosemary.

What qualifies him for the job?
Despite being elected to the Santa Monica City Council, where he served as a member for two terms (ending in November of 2012) and two stints as mayor of Santa Monica—one as mayor pro tem in 2006 and a six-month tenure in 2010—Shriver’s resume isn’t as long on political experience as his opponent’s.

Shriver did serve as chairman on the California State Park and Recreation Commission on and off beginning in 2001. (He was reappointed to the position by Schwarzenegger in 2004.) In that position, he prevented the construction of a six-lane toll road along the San Onofre State Beach and Trestles surf break in 2005 with the help of the Commission’s vice chairman, Clint Eastwood. Neither was reappointed at the end of their terms in 2008.

What issues does he support?
If elected, Shriver promises to:

What are some things he has said?
“I’m more disposed emotionally and intellectually to solve a problem with a new idea that hasn’t been tried before.”

“I have an instinctive ability to recognize people who are innovators and to support them and work with them. I’ve been an innovator myself. I know how to spot people like that. What I needed in Santa Monica for homelessness, for example, is the same thing that’s going to be needed here: some internal champions who want to change. You need to find them and back them.”

“I do have a plan, but the most important element of the plan is that when I say I’m going to absolutely do something, I mean it. I’m going to call people all day long and on the weekend. It has to be followed through on a daily basis. I’ve just never seen [change happen] by committees or consultants.”

Who supports him?
The Los Angeles Daily News, the LA Register, and the Los Angeles Business Journal are in his corner. So are ex-L.A. mayor Richard Riordan and primary election opponent and West Hollywood councilmember John Duran and more. Oh, and on the New Age spiritual activist/former congressional candidate front, he’s got Marianne Williamson.

Random fact you might also be interested to know:
He’s besties with Bono. The U2 frontman and Shriver partnered up to found PRODUCT (RED) in 2006, a line of goods that was created to help fight the AIDS epidemic in Africa. According to Shriver’s Web site, the project has raised 250 million in AIDS medicine funding to date.

Who is Sheila Kuehl?
Kuehl is a career politician who was born in Oklahoma. She became the first openly gay person elected to the California legislature in 1994 when she was elected to the California State Assembly—but not before practicing law here in Los Angeles, where she taught at USC and Loyola Law School and formed the state’s Women’s Law Center with two other women.

What qualifies her for the job?
Kuehl has a good amount of political experience on her resume—and history-making experience at that. In addition to helping to found the California Legislative LGBT Caucus, she is the first woman to have held the post of speaker pro tempore. She served eight years in the Senate and six in the Assembly, although she has been out of office since 2008.

What issues is she passionate about?
Health care, for one. She’s an open fan of a single-payer health care system. She’s also credited with authoring a bill (that passed!) that protects Californians, including undocumented migrants, from hate crimes. Kuehl is also the advocate behind California’s Senate bill 1661, which you may recognize as the CA Paid Family Leave Act. Other priorities she has outlined during this race include fixing issues with our foster care system and transportation.

What are some things she has said?
“Every person has an opinion that must be respected. And that if you want to get people to understand your issue or vote for a bill, you need to meet them where they are. You need to respect their point of view and try to move them off the dime. And, I think, I got actually very good at that.”

“If I’m elected, I will be a person who makes these [foster] kids a priority…It’s been part of the universe that I’ve always cared about very much. I’m really a social welfare, social justice person. That’s where I’ve spent most of my life, and I want to push and push but not in a critical way.”

Random fact you might also be interested to know:
Kuehl was once an actress with roles on The Stu Erwin Show and The Many Loves of Dobie Gillis, which is why we feel this is kind of OK:

Taking photos with endorser Hon. Henry Waxman. Couldn’t resist breaking into a chorus of “Singin’ in the Rain”. pic.twitter.com/2ZxzcMzOa1

The Race for One of L.A. County’s Most Powerful Posts Is Starting to Take Shape