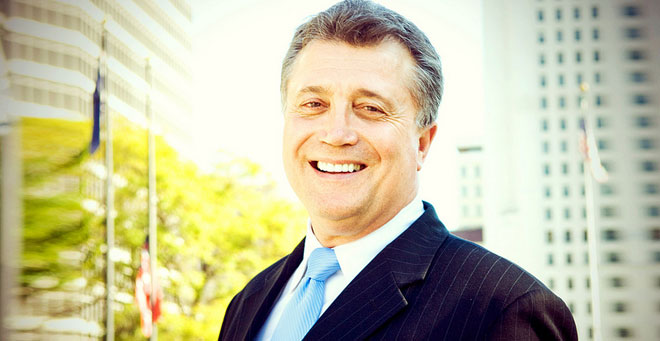 A native of San Pedro and a graduate of USC, Carmen Trutanich currently serves as the seventh City Attorney of Los Angeles. During his time in office, the 61-year-old prosecutor has focused his efforts on streamlining the workers compensation process by creating a peer-review program for those cases. Now seeking reelection, Trutanich tells us which L.A. law case inspires him, about his “unfinished business,” and why his failed 2012 run for D.A. may—or may not—have been a mistake

It’s your job to legally represent the government of Los Angeles. Is there a case from your tenure or before which you find particularly inspiring?
The most inspiring to me? Since I’ve been the City Attorney there has been a number. Some of the novel things we have done to get drug dealers off Skid Row—that’s a real inspiration to me. The people on Skid Row are probably the most vulnerable people in our society here in L.A., and being able to provide an increase in quality of life down there puts a smile on my face. It’s a big incentive for me.

It was almost like within the first couple of days of my taking office that councilwoman Jan Perry asked me to go for a walk with her one night on Skid Row. I had no idea then that this was something she did with the community. And on the first Wednesday of every month from that point on I would walk Skid Row at six o’clock at night with a couple of people from the LAPD and residents from the area. We’d walk and look at the life on Skid Row and it’s amazing—because usually Skid Row is a place you see at 25 mph from your rear view mirror. I ran into this guy who had lost his house in a fire, had no relatives, and no where to go. At 71-years-old he had spent nine months on Skid Row and he was a Korean War veteran. You start thinking, but for the grace of God go I. We need to make sure that the place where our most vulnerable citizens end up has some protection.

You are running for your second term. Do you feel you have unfinished business? If so, what’s on that list?
In every single facet of this office. There’s always unfinished business. Let’s pick the treasury. There are 7,000 lawsuits against the City of Los Angeles open right now that this office is defending. We’ve had unprecedented success winning lawsuits. We’ve tried about 149 over my term and about 137 or so with successful, favorable verdicts. And we’ve done it with inside lawyers, not outside council. We’ve dropped our outside council costs from about $26 million down to about $8.2 million, and we’ve done this while our team of lawyers has gone from 647 down to about 475. We’ve done more with less, and it looks like the furloughs [in place now] are coming to an end. We might even be able to hire a few lawyers! In verdicts, we’ve saved the city over $250 million. I’m looking to keep [doing that]. That’s just one side.

Last year you ran for the office of District Attorney despite having pledged to seek two terms as City Attorney—and you lost. What do you say to critics who point to that campaign as evidence your interests are elsewhere?
Look, I am not a career politician. I’ve been a career lawyer. I’m AV rated by Martindale Hubbell—that’s the highest possible rating a lawyer can get by his peers. I’ve tried a lot of cases in my life—all kinds—but I also know that there’s a shelf life to me. When I made the decision to run for D.A., maybe that was a mistake, but I believe that I bring to politics a whole new look at things.

I ran for D.A. for the right reasons. I didn’t do it to break a pledge or to become the President of the United States. I did it because I thought, having worked in the gang unit and having tried death penalty cases, that there’s an answer to the gang problem in Los Angeles that isn’t associated with police. 78% of the people in state prison are high school dropouts. If you want to fix the crime problem in Los Angeles, you don’t do it with cops. You do it with teachers. I hadn’t seen anybody talk this way. But now they are beginning to, so maybe out of the bad decision I made in running for D.A. a lot of good is coming out of it, because this is what the discussion is about now. In this office I learned that public safety is so important. That was my message and that’s what I saw in running for D.A. Maybe it was a mistake anyway. I didn’t win. I got the hell beat out of me about the pledge. But it doesn’t mean I’m doing a bad job where I’m at. If the message was stay put, I’m staying put.

Puppy Scammers Are Out to Ruin Christmas