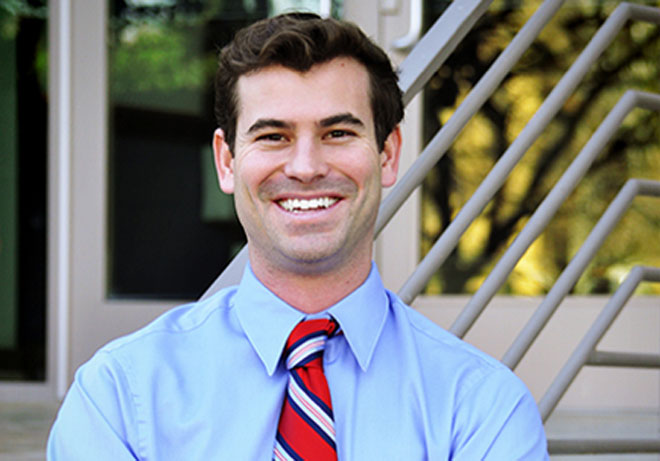 When city council hopeful Fred Sutton sent us an email last month describing his passion for shaping Los Angeles, we wanted to hear more. We called up the local hiking enthusiast to ask him about his experience in the private sector, how he intends to ease Westside traffic, and what it’s like being a candidate under 30

Where did you grow up?
In Brentwood. I’m a third generation Angeleno.

Where do you live now?
West L.A.

What’s your political affiliation?
I’m not affiliated with either party, but I find myself socially liberal and fiscally conservative.

Tell me about yourself.
Well, I’ve always been a local politics junkie. I think I’m one of the few people who used to watch L.A. Cityview 35. I was the youngest serving member of the City Attorney transition team back in 2009, and I’ve worked on several local campaigns. But my favorite thing to do is explore parts of L.A. and having a brand new experience.

Why are you running for office?
Having grown up here I’ve seen the infrastructure slowly deteriorate and a lot of opportunities have started to fade. My generation has been the most affected by that. We need to change the direction of policies to try to make Los Angeles vibrant again. Having worked in the service industry, I know there are a lot of people in the bars that want to go off and start their own restaurants and things like that. Many have college degrees and they’re underemployed, they are barely making rent, and if they can’t find those opportunities here then they are going to leave and go elsewhere. I got involved because I love the city. It’s the best city I’ve been to in the United States, and I want to stay here. I want to have my family here one day. And I want everyone to succeed. For that to happen we all need to get involved.

You served on the West LA Neighborhood Council and you just mentioned you’ve worked in the service industry. What other experience do you have in the private sector?
Upon graduating I did corporate office leasing and then more recently I started my own casting workshop, to help actors hone their business skills. And I’ve worked in different restaurants and bars in the past.

What do you think are the greatest challenges facing District 11 now?
It’s no secret that Los Angeles is facing some major budget hurdles and that has affected all districts. Because of the mismanagement at City Hall, the funds for traditional repairs to infrastructure and city safety are being scooped up and not going where they need to be. Most of the wounds have been self-inflicted, so we have serious opportunities to start improving [the situation].

But what, specifically, are the challenges facing your district? What would you focus on fixing first?
Well, sidewalk repair, for one. I’ve pledged to donate 20% of my salary to sidewalk repair. I think you need to start with a shared sacrifice in the council offices. Our sidewalks are in terrible condition. Trees aren’t being trimmed. They fall down and sit in the street for a couple days before the city can finally get to taking care of it. If you look at the parks, a lot of time you’ll see trash overflowing from the trash cans because it’s not getting picked up on time. Nothing has an easy fix, but we need to make it easier for citizens to tackle the problems in the short term while we focus on restoring original city services. We need to update our city plans—community plans, financial plans to get us out of this mess, and an environmental plan. To my knowledge there’s no comprehensive environmental plan for where we want to go as a city. Also, our police and fire and safety departments are strained.

Pledging to donate 20% of your salary to the worst sidewalk in the district—what will that do?
I want to have a competition to raise awareness. I’d have people send in pictures of the worst sidewalk they can find and we’d have a contest to see which is the worst, and that’s where my money would go. I certainly hope that $30,000 to repair the sidewalk is enough, but it’s about showing that we need to cut back and have shared sacrifice. A cut back has to begin at the representative level. I’m going to do as much as possible to be a part of the fixes.

As tech companies move into Santa Monica and Venice, traffic has gotten worse. Do you have a solution to transportation issues on the Westside?
To say I am going to be the white knight coming in to solve the problem would be misleading. Traffic is a very long-term problem. Metro has a 30-year plan, the subway is coming, the Expo Line is supposed to be completed by 2015—

But those are solutions already in the works.
As representatives we have to start backing the essential good investments and excluding the bad taxes that don’t solve any problems and are put in to plug the dike in the short term. I want to put a traffic engineer on my staff who will look for common sense solutions just for District 11. There are projects that you might be able to engage in, like converting certain areas into one-way boulevards. Let’s look at smaller scale areas where it can work. We are going to have to do all of the above.

Do you use public transportation?
I love the Expo Line. When I go to downtown, I jump on it. I don’t take the bus because you sit on the bus in traffic. But I walk nearby or bike wherever I can that’s close.

What do you say to people who think you are simply too young for the job?
I would ask them to look at all the experience that our city council will have. They’ve worked in the State Senate, the State Assembly—look where it has gotten us. A lot has to do with them not thoroughly reading contracts. If experience is needed to not read the fine print, then I can promise you [I’ll read it]. I live within my means. I pay my bills on time, and I will always be reading the fine print to be sure things like [my district’s] billboard problem will never happen. I’m a product of this recession and I’m always going to approach things with caution.