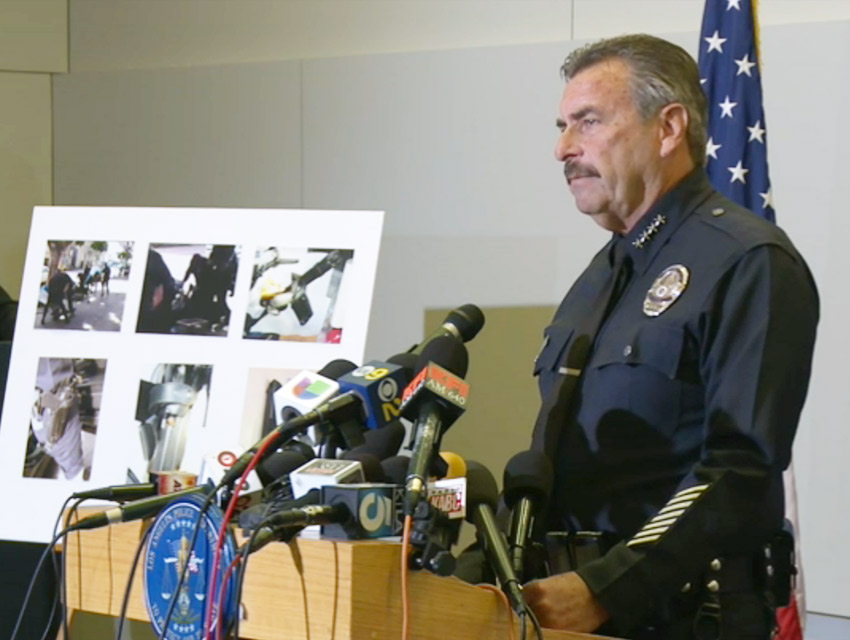 On Sunday afternoon, a homeless man who went by “Africa” was fatally shot several times by LAPD officers. The officers had been dispatched to the 500 block of San Pedro Street in response to a robbery call implicating Africa as the suspect.

According to a timeline of events presented by Police Chief Beck at a press conference this morning, Africa, who had recently returned to the street after spending some time in a mental health facility, would not comply with officers’ commands and began to fight with them. “While on the ground and struggling with the officers, the man forcibly grabbed one of the officer’s holstered pistols, resulting in an officer-involved shooting,” Beck said. He called the incident a “tragedy” and a “brutal, brutal fight.”

The four police involved were part of the Safer Cities Initiative, a task force focused on Skid Row-related crime. They were also “specially trained in dealing with homeless people and mental health issues,” Beck said. Some also participated in the LAPD’s 36-hour mental illness training course.

The incident was captured by Anthony Blackburn, who recorded the events with his cell phone and then posted the resulting video to Facebook. It has since been removed. The officers involved were also wearing body cameras, but in light of an ongoing investigation, the footage captured will not be released. The investigation will, however, take video footage into account. “These are some of the most exhaustive investigations we do,” Beck said.

In the interim, mayor Garcetti is asking the public to withhold criticism until the incident has been fully analyzed. “I don’t think you or I should judge tactics or whether a situation was done right or wrong before an investigation is done,” he said.