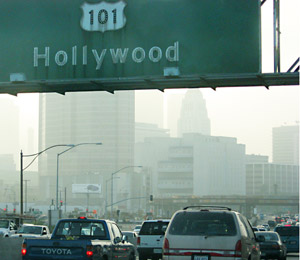 California dreaming? Try California stressing. A new study by Portfolio.com ranked Los Angeles the second most stressed out city in the nation, topped only by recession-stricken Detroit. Though we score points for sunshine (one of the ten factors used to produce the ratings), L.A. residents are faced with the most expensive housing and second-worst air pollution among the 50 biggest cities in the U.S. We also have a high unemployment rate (11.6 percent). Other indicators include poverty, murder, robberies, and income growth. Gulp.

Don’t believe that we’re really facing that much stress? Los Angeles also ranked second (behind Las Vegas) in a similar survey Forbes released a month ago.

Nearby Riverside ranked high on Portfolio.com’s list too, coming in at number 4 above both New York City and Las Vegas (numbers 6 and 21, respectively). In fact, California doesn’t fare too well as a whole. At 26, San Diego barely made the lower half of the list. Sacramento and San Francisco came in at 17 and 22.

Take a few deep breaths. Then tell us what stresses you out.