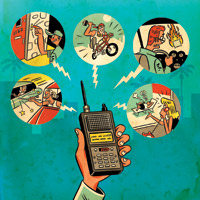 A dude goes for a 1 a.m. stroll in downtown—with an Uzi. A Jeep drag-races an Aston Martin in West L.A. A transvestite in pink throws a love seat over a fence in Echo Park. It’s another week in Los Angeles, and there to report it all (from a distance) is @LAScanner, a Twitter feed that takes hyperlocal news and makes it hilarious. The new brigade of populist crime hounds aren’t beat reporters; they’re police scanner junkies. They tweet piquant details of local police calls, often before the helicopters and camera crews arrive. Among contemporaries like Weho Daily, sgvscanner, and Venice 311, @LAScanner isn’t the most frequent updater, but he is the funniest.

About four nights a week @LAScanner tunes in his Uni-den BC296 radio, sharing tidbits with his fan base. Some incidents beg comment, such as “Either the Banana Republic is getting robbed AGAIN @ CC Mall, or cleaning crew loves to dust that panic alarm.” He insists on anonymity and claims only three people know about his alter ego. He does say that he was born and raised here, is in his midthirties, works a “slightly irregular” office job, and lives in the Miracle Mile. He got hooked on scanners as a kid, listening to airplane traffic.

“You’ve got to be careful about what you’re putting out there,” he says. “It could have unintended consequences.” He rarely tweets exact addresses or reports on domestic violence calls, and he has learned to rein in the yuks when the situation demands it. “If someone gets shot 30 times with an assault rifle, that’s worth tweeting about because it’s a serious crime,” @LAScanner says. “If someone gets shot with a blow dart, that’s funny.”

What he’s created is a two-way radio with his followers. He responds to inquiries about specific crimes or issues warnings to avoid an intersection. The result isn’t just L.A.’s own Grand Guignol unfolding in cyberspace. It’s a messy, sad, and absurd snapshot of misbehavior in the city.