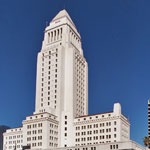 Two weeks after an embarrassingly low number of Angelenos cast their ballots in exchange for an “I voted” sticker, mayoral candidates Eric Garcetti and Wendy Greuel are working to broaden their support bases by picking up political endorsements and wooing voters who backed fellow Democrat Jan Perry or Republican Kevin James in the March 5 primary. How much headway has been gained? With nine weeks left to go before the May 21 runoff, it’s unclear how voter support has shifted. On the endorsement front, Garcetti has won the backing of primary candidate Emanuel Pleitez and city councilman Paul Krekorian, while Emily’s List, a national group that supports female candidates, Los Angeles Community College District Trustee Ming Eng, and Eng’s wife, U.S. Representative Judy Chu, have lined up behind Greuel. And outspoken former opponent Kevin James? He’s withholding his vote—at least for now.