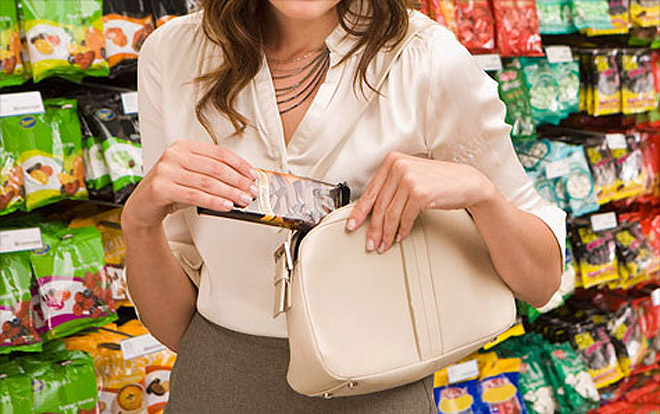 I first did it with two friends, probably in the eighth grade. I want to say I took lip gloss or something small from the drugstore. It wasn’t like I couldn’t afford to pay for the stuff. It was just the idea that I could have anything I wanted. Like, “I don’t really need this, but it’s free!” I just wanted something new.

When I was a junior in high school, I got another friend to do it with me. It didn’t take a lot of coaxing. I’d say, “Let’s go to the mall,” and she’d just sort of know. We’d go to Nordstrom and I’d bring a big purse. First you’d take a top. Then a pair of jeans. You’d test the limits. It was easy. None of the clothes had sensors on them. You’d simply put things in your bag and walk out, wondering if anyone was going to stop you. That moment was kind of scary, but exciting, too.

My parents have a very clear sense of right and wrong, and I was always the good kid growing up. I never did drugs. I didn’t drink until my senior year of high school. I hung out with the good kids and got good grades. So shoplifting was the one thing I did that was against the rules. Since I took things from big stores—I know this is wrong—I’d think, “Oh, it’s OK, they make enough money.” I didn’t think much about the risks. A girlfriend of mine got caught in a grocery store, and it was embarrassing. I figured the odds that I’d get thrown in jail were pretty low.

When I got to UCLA, I’d go to the student store and take workout clothes, magazines, little stuff. But then my boyfriend caught me with something from the Gap. I didn’t tell him I’d done it before. He didn’t give me an ultimatum, but he was disappointed in me. After that, the temptation was still there because I knew it’d be so easy. But I pretty much stopped.

It’s interesting, but now that I have a job and make my own money—I’m a lawyer—I’m very strict about paying for everything. I don’t know if that stems from guilt or trying to make up for the past, but if I’ve been undercharged, I’ll go back and make sure that I pay.