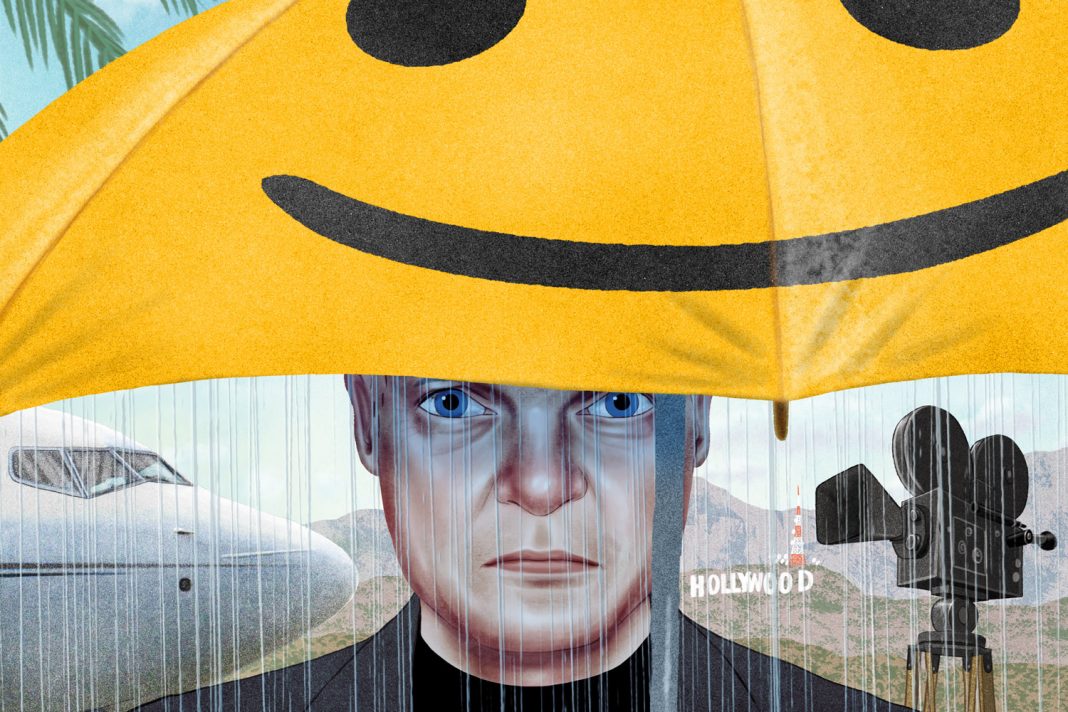 The last time Carrie Mitchum saw her dear friend Steve Bing, he was seated across the table from her at his apartment on the 27th floor of a luxury apartment building in Century City, asking if she believed in God. She remembers the view, an empty refrigerator, and a man searching for meaning. She told him she did believe in God—at least sometimes—to which he said it didn’t matter either way. “The best way to put it,” says Mitchum, a chef and the granddaughter of actor Robert Mitchum, “is that he was frustrated with the lack of answers.”

A few months later, on the afternoon of June 22, Bing, a prominent film producer, political donor, and activist—and scion of a prominent real estate family whose name graces multiple buildings across the city—leapt to his death from that same apartment. He was 55 years old. The LAPD and L.A. County Medical Examiner-Coroner’s office, ruled his death a suicide, but that didn’t stop sordid conspiracy theories that linked Bing’s death to the late Jeffrey Epstein (the convicted pedophile and someone who Bing briefly socialized with) from blooming online.

For most of his adult life, Bing inhabited the overlapping worlds of Democratic Party politics, philanthropy, and entertainment. He inherited a $600 million fortune at the age of 18, which propelled him into a life of filmmaking, activism, and tabloid headlines that trailed him for much of his life. But what quickly comes through in conversations with Bing’s friends and colleagues is that his was a Janus-like existence. For those who got their news in grocery-store checkout lines, Bing was a caricature and a cautionary tale of American privilege. After graduating from the Harvard School for Boys (now Harvard-Westlake), he attended Stanford University before dropping out to pursue his dream of becoming a Hollywood player. He palled around with Bill Clinton and Mick Jagger. He wrote eight-figure checks, almost recklessly. He dated a string of starlets. He liked to gamble and was famously impulsive. But there was also another version of Bing that was incongruous with the version in the tabloids.

“I loved Steve. I loved the way his heart and his head were connected,” says architect and sustainability expert John Picard, who advised Shangri-La Industries, an arm of Bing’s company that focused on sustainable development and construction. Among the projects Picard collaborated with Bing on was Hangar 25 at the Bob Hope Airport in Burbank, the first aviation hangar to achieve optimal marks for sustainability. Picard believes the green movement, which promotes the transition from fossil fuels to solar and wind power, wouldn’t be where it is today without Bing’s support. “I’ve never met anyone like Steve, and I don’t think there will be another one like him. He moved the needle because he put everything into the things he was trying to change and that he cared about,” says Picard.

There was a version of Bing that was incongruous with the version in the tabloids.

Bing was first and foremost a film producer. His IMDb page lists a grab bag of projects: He produced Get Carter, which starred Sylvester Stallone, and the Warren Beatty film Rules Don’t Apply. He wrote 2003’s Kangaroo Jack, which, though critically panned, went on to gross $89 million on a $60 million budget, helping establish Bing’s bona fides. Like everyone, he had his fair share of bombs. But the setting and circumstances of Bing’s death felt more Less Than Zero than anything else. The luxe Ten Thousand apartment building where Bing was living made headlines several years ago for its on-site “botox bar.” The penthouse at the Ten Thousand costs $65 thousand a month, and the building has emerged as the go-to spot for L.A.’s deep-pocketed divorcées who congregate for a second (or third) act in life. It’s a 40-story distillation of all the clichés about L.A.

“Honestly, it was surprising that Steve even decided to live there,” says one friend, who like many people interviewed for this article declined to speak on record, citing sensitivities surrounding Bing’s family. According to this friend, Bing never once participated in any of the building’s famed social mixers thrown in its sleekly designed common spaces. “He seemed like a gentle soul. For all the privilege he grew up in, he had a good perspective on it,” the friend says.

“During our meetings, you could sense the stress in his silences—you could feel the energy.” —John Picard

Gavin Polone, a prominent agent and manager in the entertainment industry, told The Hollywood Reporter that when he and Bing were in seventh grade together in the mid-1970s, Bing was a popular, attentive kid. “He would go home and rewrite the notes he took in class. He got straight As. He not only worked hard, he was smart. I remember thinking he was going to be a senator,” Polone told the trade magazine.

Polone wasn’t far off. Politics ended up consuming a huge portion of Bing’s life, and his generosity as a donor was legendary. He poured tens of millions of dollars into various Democratic and progressive causes, including Bill Clinton’s campaigns and Hillary Clinton’s failed bid for the White House in 2016, and he donated more than $10 million to the William J. Clinton Foundation. In 2006, Bing singlehandedly bankrolled the California ballot measure Prop. 87 to the tune of nearly $50 million. That proposition aimed to raise $4 billion in oil-production taxes that would have gone to develop alternative fuels, but it fell short at the polls.

Beyond politics, he contributed to a wide range of causes, including an effort to rebuild the Ninth Ward of New Orleans after Hurricane Katrina; and here in Los Angeles he donated generously to the Silverlake Conservatory of Music, which provides scholarships to underprivileged children.

But Bing wasn’t a great judge of character. When recounting the impact Bing had on his career, Picard—who was speaking from Maui where he had been sheltering in place with his family during the pandemic—started to get teary. Picard remembered having to make a conscious effort to step away from the hangers-on and the girls that often orbited around Bing. “There were a lot of distractions in his life, and he had people pulling him in all these different directions,” says Picard. “During our meetings, you could sense the stress in his silences—you could feel the energy. There was always someone reaching to grab the money or the power that he could wield.”

As a result, tumult and tragedy seemed to follow him everywhere. Starting around 2003, he had two very public paternity battles: the first with Elizabeth Hurley, whom he had dated, and the second with media mogul Kirk Kerkorian over the daughter of Kerkorian’s then-wife, tennis player Lisa Bonder. Bing was revealed to be the biological father of both Hurley’s son, Damian, and Bonder’s daughter, Kira.

Last year he clashed with his father, Dr. Peter Bing, who tried to have Bing’s two children removed from a family trust. The younger Bing challenged that move in court and prevailed after a judge dismissed the case. Also last year, Bing’s former girlfriend, 28-year-old actress Allexanne Mitchum, was found dead, reportedly of an accidental drug overdose. According to Carrie Mitchum, Allexanne’s aunt, her death left Bing distraught and wracked with guilt.

“I’m sure some negative stuff about Steve is going to come, whether it’s about women or drugs or something to do with business,” says Mitchum. “But the focus should be on the good things he did—not just the donations, but the fact that he cared about people and the human condition. To remember someone for something they did 18 years ago is kind of shitty.”