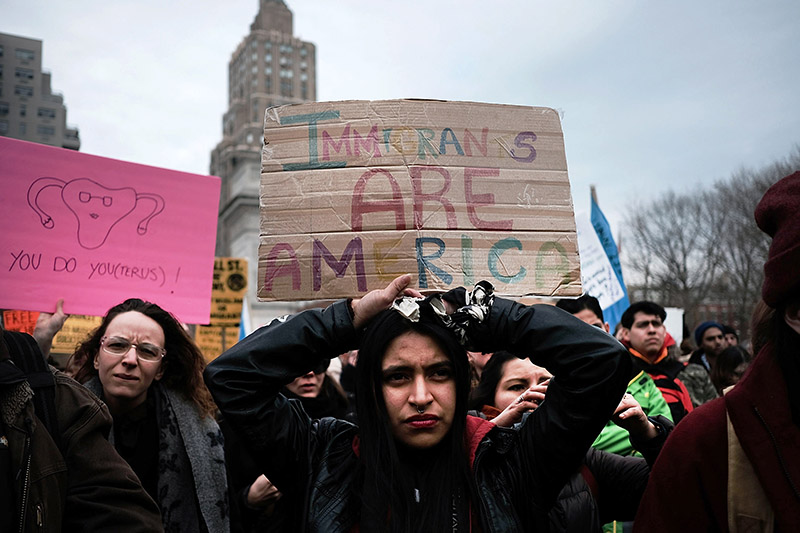 Stephen Miller—Donald Trump’s advisor with a history of spreading racist and nationalist ideology dating back to his days at Santa Monica High School—says a Trump reelection will mean ramping up the administration’s war on aspiring legal immigrants.

In an interview with NBC News Thursday, Miller said the administration intends to retaliate against sanctuary cities, further limit asylum grants, expand the travel ban, and clamp down even harder on work visas in order to achieve its goal of “raising and enhancing the standard for entry” to the United States.

Despite the fact that the Supreme Court already struck down Trump’s attack on California’s “sanctuary law” in June, ruling that local authorities don’t have to assist federal agents in taking custody of immigrants as they are released from jail, a second-term Trump would continue to pursue such policies with a vengeance.

Trump “is going to be really cracking down aggressively on sanctuary cities,” Miller said. Noting that the administration has already withheld crime fighting grants from states that don’t go along with its immigration policies, Miller said it will continue to turn the screws with two new initiatives.

First, Trump would push for a bill by Senator Thom Tillis (R-N.C.) which would punish jurisdictions that refuse hand over illegal migrants to Immigration and Customs Enforcement for deportation after they are arrested. Next, Trump would try to “outlaw the practice” with legislation making it mandatory for authorities to turn the arrested immigrants over to the feds.

As for Trump’s “zero tolerance” policy that separated children from their families, leaving lawyers for more that 500 immigrant kids unable to locate their parents, Miller said the administration is “100 percent committed to a policy of family unity.”

If Trump gets to take the Oval Office for another spin, however, those families will be united in detention centers. Trump wants to amend the Flores agreement, which prohibits children from being held for over 20 days in ICE detention. In a second Trump term, immigrant families could be held indefinitely as they await their hearings in immigration court.

Asylum seekers have been refused U.S. protection in record numbers under Trump, and Miller wants even fewer of them here going forward by expanding “burden-sharing” agreements with Honduras, Guatemala, and El Salvador that prevented asylum-seekers getting into the United States.

“The president would like to expand that to include the rest of the world,” he said. “And so if you create safe third partners in other continents and other countries and regions, then you have the ability to share the burden of asylum-seekers on a global basis.”

Foreigners will also be kept off American soil by “building on and expanding the framework that we’ve created with the travel ban, in terms of raising the standard for screening and vetting for admission to the United States,” Miller said.

Trump will eliminate the lottery system for guest worker visas and simply give priority to those being offered the highest-paying jobs.

Miller conceded that this particular wish list item would require some heavy lifting.

Lastly, the Trump administration would finalize its campaign to shut the door on thousands of guest-workers by further limiting programs like H-1B visas. To that end, Trump will eliminate the lottery system used when applications exceed the annual quota and simply give priority to those being offered the highest-paying jobs.

Miller said Trump would implement a “points-based entry system” for the visas, admitting only those who “can contribute the most to job creation and economic opportunity” while preventing “displacement of U.S. workers.”

Jen Molina, the Biden campaign’s director of Latino media, told NBC, “We are going to win this election so that people like Stephen Miller don’t get the chance to write more xenophobic policies that dishonor our American values. Unlike Trump, Vice President Biden knows that immigrants make America stronger and helped build this country.”

Molina added that, if elected, Biden would restore DACA, unveil legislation for a pathway to citizenship for undocumented people in his first 100 days, and end “shameful practices like family separation.”

RELATED: Trump Advisor Stephen Miller Has Always Been This Way