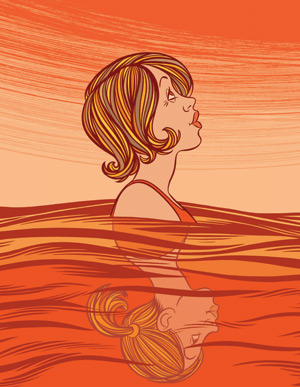 These are the months I long for, the final flare-up of serious warmth before we turn toward the holidays, the cooling nightfall coming earlier and earlier. No, wait, my bones say, wait. Let’s have another blast; let those fiery winds blow in from the desert. Let it be marvelously, eerily, blazingly hot for one last stretch; let the palm fronds rustle and the dogs pant and the heat-averse complain and the young girls hang on to their flapping miniskirts as they walk down the street. This is the time for me, the grace period before we slip closer to winter.

All my life I have heard people say that L.A. has no real seasonal demarcations. I have listened to countless paeans, uttered invariably by nonnatives, to fall foliage and crisp, snowy Christmases and spring rebirths. On and on they rhapsodize about the weather in the places they left, though in time their grumbles tend to be muted by the greatest climate on earth. Do I overstate? Is this the reactive protestation of a homegrown girl? I don’t think so. We are blessed with benign and temperate sunshine—right through the winter. But if you are watching, the quality of the light shifts: thin and clean in the winter, thick and gilded and often smoggy in the heart of summer. Throughout the year we can have spikes of heat that appear seemingly out of nowhere, intense enough in January to cause the Rose Bowl crowd to strip down.

Come September and October we can inevitably depend on one of those major upticks in temperature. This is our annual exclamation point, our Indian summer. How I love those words, that couplet. The dictionary defines the phrase as “a period of warm weather in late autumn or early winter, a happy or flourishing period occurring toward the end of something.” Yes, happy, but that happiness is flecked with elegy, the sense that we are indeed moving toward the end of our play days, trying to hold on to the last vestiges of them. How well I remember sitting through the first weeks of class on those hard little chairs, drenched in sweat, staring out into the baking afternoon, longing for the lost freedom of summer, knowing that when released by the day’s final bell, I would be fetched by a parent who would cart my sister and me to the nearest pool or beach to cool off.

In the Indian summers of my childhood, we were in water from the second we got out of school until late at night. Nobody had air-conditioning—certainly nobody I knew. My parents, divorced when I was young, each had a preference: My father had a pool; my mother loved the ocean. Depending on the adult in charge, we would immerse ourselves in one or the other, giddy with what we knew were the waning days of our swimming till the next June or July. We were allowed to stay up way past our normal bedtimes because, Who was going to be able to sleep in the hot, sticky air? The parents, too, got in the water, laughing and flirting. They were so young and pretty, the adults, sexed up by the heat and the cocktails—martinis or margaritas—that they sipped out of plastic glasses. I remember noisy late-night kid and grown-up games of Marco Polo in my father’s pool just as I recall bodysurfing under the stars at age 11, 12, 13. We would emerge from the ocean into the remnants of the warmth, the silhouette of the coastal hills in Malibu outlined by the spooky red light from an out-of-control fire.

We knew about the potential ferocity of the Santa Anas. Our elementary school burned to the ground in the Bel-Air fire of 1961; evacuated, we watched the TV, teary eyed, as the place went up in flames, its loss surreal until a few days later, when we drove there and saw the ashy residue of the classrooms and auditorium. Later, of course, I would read what various writers had to say about these winds, about how they set people’s teeth on edge, set the entire city on edge. For me, that was half the story. The torridness they customarily brought marked the happiest time, when we splashed into the night, ignoring our homework, resisting the knowledge—but knowing it in our sun-baked bodies nonetheless—that in one moment more it would be over. The winds would quiet, the thermometer drop, and we’d be in those hard chairs for a long, sobering school year. Playtime was done. The evocative smells—chlorine and Coppertone and Noxzema for our burned noses and shoulders—would disappear as life took a turn for the serious. Pool heaters were shut off and old kettledrum barbecues were covered or rolled back into the garage, and I would begin my countdown until the basin started to ease into summer again, living all the while in a state of mourning.

So here we are again at this, my favorite time of year. In recent decades, instead of seeking respite in sea or pool, I have—like so many—huddled inside, increasingly disconnected from the outside world. Everything is air conditioned now, to a chilly fault. In general, we have become a much more indoor city, one that turns its back to the coastline. I know of no other metropolis that is so detached from its water—not just a river or lake but a whole luminous ocean, with all the corny existential, meditative possibilities that looking at such a horizonless spill of water allows. Why don’t we furrow-browed, caffeinated Angelenos walk along the tide line or watch the sunset, not to mention take a ritual baptismal dunk? Even on the most sweltering day, the beaches near me are deserted, the lone bodysurfer catching the waves or the occasional family bouncing in them. The same is true of pools; most people I know don’t use theirs. In the gargantuan houses that sprouted up in the expensive neighborhoods in the flush years, a lot of people didn’t even put them in, choosing to build lot line to lot line, making more room for the techno toys of denatured, modern urban life. I have been as guilty of this hunkering down as anyone.

But four years ago things changed. We put in our own small pool. It happened on a whim, happened because our new yellow Labrador puppy loved to swim. Seeing his joy as he leaped into a friend’s pool, I remembered my own on those nights at my father’s. My husband and I envisioned something modest and figured we could afford it. Long-married writers working at home all the time, we were suffering as well from conjugal cabin fever. We needed to mix it up, find a new domestic diversion. Also, we did not have air-conditioning, toughing out the heat spells with multiple fans and cold showers. The idea took hold, and suddenly we had a huge muddy pit in the backyard. I watched, astonished and enchanted. A midlife woman, I was going to have my own backyard swimming hole. My limbs started to loosen up, giddy with memories. But I wondered whether we would really use it; I had seen so many friends abandon theirs after the kids lost interest or the novelty wore off.

Labs don’t lose interest, nor do they go off to college. They stay in the moment, preferably a wet one. As soon as the pool was filled, he was in it and so was I. We have swum together through every season, but most avidly—certainly for me—on these warm autumnal days. I rise early in the morning and put on my swimsuit, shorts over it, as if I were a kid at camp again. I await my first plunge, trying to make it past noon so I can get a little work done. I can see the pool from my office window, a darkish pond in the left-hand corner of the yard. When the house is just too hot, my prose too flabby, I take off at a trot, the dog flying ahead of me. We swim on and off through the day, eating our meals poolside. The neighborhood kids appear for play dates, as do the neighborhood dogs, and we have a jumble of shrieks and damp fur. But my happiest swims are alone, late of an evening, when the midnight air is sometimes still thick with heat. I rise from bed and, shedding my nightgown as I head outside, slip naked into the cool, dark water, a voluptuous last dip, the dog, of course, beside me. I watch the stars, hear a siren, feel the city trying to settle down around me.