Home Uncategorized The Chinese Theatre’s Forecourt to the Stars 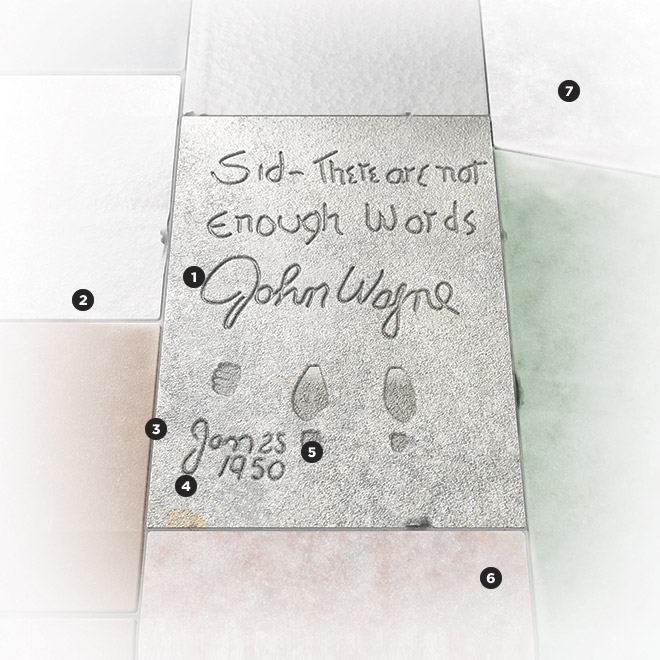 Showman Sid Grauman claimed he struck PR gold when actress Norma Talmadge accidentally walked on wet cement outside his Chinese Theatre in 1927. Hundreds of celebrities have since made their marks in front of the famed movie palace on Hollywood Boulevard (now called the TCL Chinese Theatre). Here’s how the Forecourt to the Stars gets set.

1. The Honorees
Candidates are approved by a confidential Hand and Foot Print Ceremony Committee. Of the 273 imprints, the most popular belong to John Wayne, Marilyn Monroe, and Jackie Chan.

2. The Ceremony
The event, which starts in the late morning, lasts 30 minutes. Once it’s over, the imprint is moved to a safe location to dry for a few weeks—sometimes months—before being permanently installed.

3. The Tablets
The concrete is an extrastrong “artisan mix” custom made by Jose Resendiz at the Panorama City-based Resonne Designs. Forty-five minutes before the ceremony, the dense liquid is poured three inches thick into a rectangular or square tray.

4. The Personal Touches
Marilyn Monroe wanted to dot her i with a diamond. The theater manager nixed the idea, so she placed an earring—which was soon stolen—in the concrete instead. The back of her earring remains. Other stars have made imprints with coins, cigars, guns, and locks of hair.

5. The Inscriptions
Using the point of an arrow, honorees etch their name and a short sentiment into the concrete, capped off by the date. Each “pen” is kept by the theater as a souvenir.

6. The Prints
While kneeling on a low bench, honorees push their palms into the wet concrete for roughly 30 seconds, then wipe their hands on damp and dry towels. Next are the feet. Most stars keep their shoes on as they press into the tablets, then donate the dirtied items to the theater for posterity. Nine actors, including Shirley Temple and Sean Connery, have squished in with their bare tootsies.

7. The Buried
Under Greer Garson’s tablet is a time capsule intended as a WWII tribute that holds the manuscript, the screenplay, and a film print for Mrs. Miniver.