Home Media Staying on Message with the First Lady 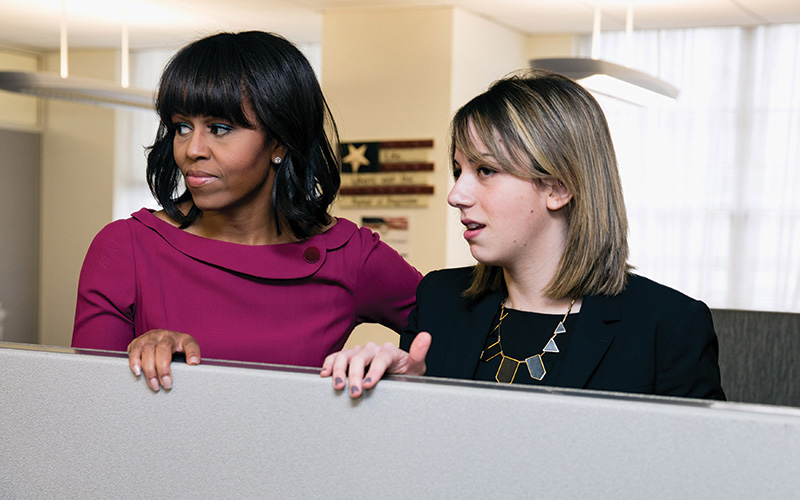 On January 20 the Obama administration comes to an end. And while the president could hold an audience with the best of them, no other first lady has sought to engage the public quite like Michelle Obama. Whether doing a cameo on NCIS, “mom dancing” with Jimmy Fallon, or singing “This Is for My Girls” with James Corden behind the wheel, she has earned points for her utter willingness to lay it all out there as much as for her skills behind the mic.

The late-night appearances have made Lauren Vrazilek’s job a lot more interesting, not to mention challenging. As deputy press secretary to the first lady, she handles the usual docket of White House duties—“we call it the official bucket,” she says—as well as arranging those star-filled extracurriculars.

Raised in Agoura Hills, Vrazilek was a student at UC Santa Barbara when she googled “how to intern for Michelle Obama” and came upon an application for White House internships. It was finals week, and the outdoors-loving poli-sci major (favorite beach: “Zuma, near Tower 6”) was feeling overwhelmed. Her mom told her that if it came down to getting a B in a class in order for her to apply for a White House internship, she should go for it. “I’ve never regretted that B,” Vrazilek says.

After graduating in 2010 and heading to Washington that fall, she did time in the first lady’s “correspondence office.” “So yeah, I literally started in the mail room,” she says. Promotion followed promotion, until she secured her current job as Mrs. Obama’s deputy press secretary in 2015.

No day is typical. On one, Vrazilek is arranging a rally with Cavs star LeBron James and hundreds of kids; on another, she’s working out the details of the commissioning of a nuclear sub. Or she’s toiling to set up that spot on NCIS, the first time a TV series crew has been allowed to shoot inside the White House. In the episode the first lady stumps for the issue of “spousal licensing,” which makes it easier for partners of service members on the go to transfer employment credentials from state to state. “It’s not a really sexy issue that’s easy to explain to folks,” Vrazilek admits.

Her most memorable assignment? Helping arrange a music video in which the first lady spits rhymes with rapper Jay Pharoah about the importance of going to college. “There was no precedent for having a first lady doing a rap song,” Vrazilek says. “But it was funny and silly, so we went for it.” A couple of months later Mrs. Obama was visiting a classroom, and a boy told her that he had seen her rapping on TV. “What was I rapping about?” the first lady asked. “Going to college,” the boy replied. “That, for me, was the break-through,” says Vrazilek. “That’s exactly what all this has been about.”

With her datebook opening up considerably this month, Vrazilek is eager to return to the L.A. area, with its fine weather (“off the record, it’s the worst,” she says of D.C.’s climate) and year-round hiking. After the rigors of Washington, she’s game for anything. “Some days I want to open a Pilates studio,” she says. “Some days I want to host a QVC show.”