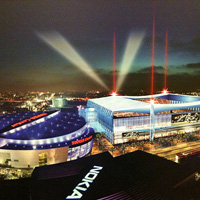 In the arduous, two-year saga over Downtown’s proposed billion-dollar NFL stadium, there has been no lack of hot air spouted from both developers and city council members. One voice that has been notably absent in the debate, however, is that of the public. All that will change Wednesday, when for the first time the general public will be allowed to attend a Planning Committee hearing at the L.A. Convention Center’s West Hall (4-8 p.m., room 501).

Though Wednesday’s meeting is an informal one, it will kick off a lengthy approval process which will address everything from increased traffic concerns to the risk of pollution associated with development runoff; all of which is subject to inspection by the discerning local citizen.

On Friday, Anschutz Entertainment Group, the company behind the downtown stadium deal, hired Los Angeles-based Gensler architects to design the proposed 64,000-seat stadium, which would take shape next to Staples Center. AEG also recently inked a $700 million dollar naming deal with Farmer’s Insurance and hopes that, along with increased tax revenues generated by the stadium, they will be able to offset the cost of taxpayer-funded city bonds. Needless to say, there will plenty for the public to discuss in the coming months.

Whether you are someone who questions the logic of the city funding a massive stadium or simply can’t wait to dust of your old football jersey, you are sure to find like-minded company at Wednesday’s meeting.