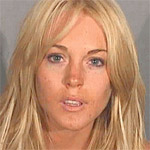 New York has its share. New Orleans, for sure. And never count out Dade County. No place, however, can compete with the volume of famous people who run amok in L.A. The ever-growing roster of stars whose arrests have been documented by jailhouse photographers here has transformed the mug shot into something of an art form, complete with subgenres: There’s the stab at composure exemplified by Mischa Barton (popped in 2007 for drunk driving), the peering-through-the-haze squint of Ryan O’Neal (assault, 2007), the mania of Phil Spector, and the keep-at-it-till-you-get-it-right style of Ms. Lohan. The images, we tell ourselves, are glimpses of the reality behind the facade—proof that we all have our bad days—but the truth is, they’re just a dollop of schadenfreude for most people. Way back, the famous could rely on protection from an army of publicists, studio bosses, and newspaper hacks, insider aces who cooked the story like bagmen burying evidence. That’s probably one reason you won’t see booking shots of Robert Mitchum (nabbed for pot in 1948) or Hedy Lamarr (shoplifting at the Wilshire May Co. in 1966) or Charlie Chaplin (arrested for drunkenness). Another is more mundane: Not all local police departments release mug shots. While the sheriff’s department and jurisdictions like Santa Monica do, law enforcement agencies in Los Angeles and Beverly Hills do not.