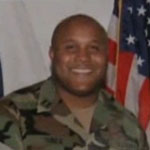 State and federal employees today are searching for former LAPD officer Christopher Jordan Dorner, 33, a suspect in a double homicide that occurred over the weekend and the shootings of three police officers today. In a manifesto posted on his Facebook page, Dorner threatened “unconventional and asymmetrical warfare” against police, and specifically mentioned more than two-dozen people. News outlets are reporting the people named in Dorner’s manifesto have been provided with police protection.

Earlier this week Dorner was named a suspect in the double homicide of Monica Quan and her fiancé, Keith Lawrence, who were discovered shot to death in Irvine on Sunday. Quan’s father, Randy Quan, is a retired LAPD captain who participated in the process that led to Dorner’s 2009 dismissal from the LAPD.

Dorner is also suspected in two shooting incidents that occurred today. Two LAPD officers assigned to protect someone mentioned in Dorner’s manifesto were shot in Corona early this morning. Shortly after, two patrol officers were ambushed at a red light in Riverside.

LAPD Chief Charlie Beck this morning told reporters that Dorner should be considered armed and dangerous. “Of course he knows what he is doing,” he said, adding, “we trained him.”

Tragically, the ongoing manhunt for Dorner has already resulted in additional casualties. Two women in a vehicle matching the description of Dorner’s were shot by police who wrongly suspected he was in the car. Both victims were taken to an area hospital for treatment. A similar incident involving Torrance police officers occurred moments later, but no injuries were reported.

Mayor Antonio Villaraigosa has asked Angelenos to remain alert and report any suspicious activity by calling 911.